SEOUL, Jan. 3 (Yonhap) -- Four lawmakers of the ruling Democratic Party (DP), who are concurrently serving as ministers in President Moon Jae-in's Cabinet, said Friday they won't run for reelection in April's general election, vowing to devote themselves to the success of the Moon government.

SMEs and Startups Minister Park Young-sun, Land, Infrastructure and Transport Minister Kim Hyun-mi and Education Minister Yoo Eun-hae held a joint news conference at the National Assembly in the morning to announce their decisions not to run in the parliamentary general election slated for April 15.

Minister of Interior and Safety Chin Young didn't attend the news conference but delivered his intention to give up his candidacy for the April election to DP Chairman Lee Hae-chan. 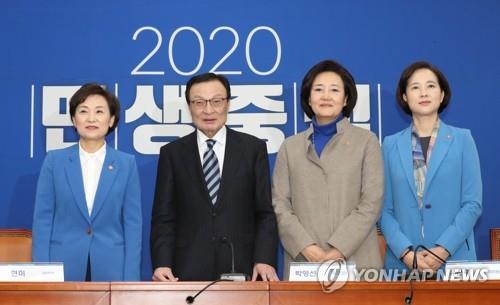 The four lawmakers-turned-ministers had all joined Moon's Cabinet while serving as a DP lawmaker.

Park, a four-term lawmaker, said at the conference that she, as an SMEs minister, will now concentrate on transforming her constituency in the Guro district in southwestern Seoul into a hub of the fourth industrial revolution, instead of seeking another term in the assembly.

Kim, a three-term lawmaker, said giving up her electoral constituency in Ilsan, north of Seoul, was a very difficult decision and stressed the success of the Moon government is an important task.

Yoo, a two-term lawmaker, said she, as the first female deputy prime minister for social affairs in the Moon government, will do her best to fulfill her task as the education minister and help the president.

DP Chairman Lee said Chin was not on hand at the news conference, because he is the minister in charge of overseeing the general election.

"The upcoming general election is very important and has meaning in our history," Lee said, vowing to attain a victory. "The election results may determine the fate of our country."