INCHEON, Jan. 3 (Yonhap) -- Two workers were killed and one other was injured when a 30-meter-high tower crane collapsed at a construction site in Incheon, west of Seoul, on Friday, police said.

In the 8:32 a.m. accident at the site for the construction of a cutting tool manufacturer's headquarters, a 58-year-old worker and a 50-year-old worker, both from a crane installment company, were killed. Another worker, 34, from the same company sustained an injury on his left arm and was taken to a nearby hospital.

The three workers were working on a 24-meter-high point of the T-shaped crane before it snapped and fell to the ground. The 50-year-old worker was found dead under debris following the accident.

According to police, the workers were in the process of dismantling the crane by loosening steel bolts, which held the crane's body together, in phases. The police are investigating a CCTV footage at the site to look into what caused the incident.

The construction project calls for the establishment of a nine-story structure for the cutting tool company's headquarters, with an additional two stories underground. Construction of the structure began in May 2018 for completion in April this year.

Han Sang-gil, chief of a tower crane leasing cooperative, said eight bolts should be in place around the crane's body and "the accident may have taken place because a fewer number of bolts had been there or the bolts had not been tightened enough."

The police are examining whether there was a lack of safety measures in the dismantling of the crane or the crane was unable to withstand its weight. 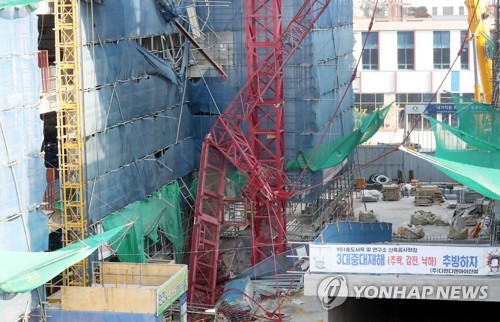