HWACHEON, South Korea, Jan. 3 (Yonhap) -- The 2020 Hwacheon Sancheoneo Ice Festival will be open to foreign visitors on Saturday, one week ahead of its formal opening, county officials said Friday.

The world famous festival was originally scheduled to kick off on Saturday on a frozen river in the Gangwon Province county of Hwacheon, about 120 kilometers northeast of Seoul, but has been delayed by one week due to unseasonably warm weather.

To avoid confusion among foreigners who had already booked flights or tour packages, however, Hwacheon's county government has decided to open the festival only to foreign visitors from the original opening date.

Korean visitors are invited to enjoy the annual ice fishing festival from Jan. 11 to Feb. 2, they added. Approximately 20,000 fishing holes will be pierced through the ice over a 2.1-kilometer area about the size of 24 soccer fields, and about 200 tons of "sancheoneo" will be released during the festival. Sancheoneo is a species of trout known to live only in very clean fresh water. 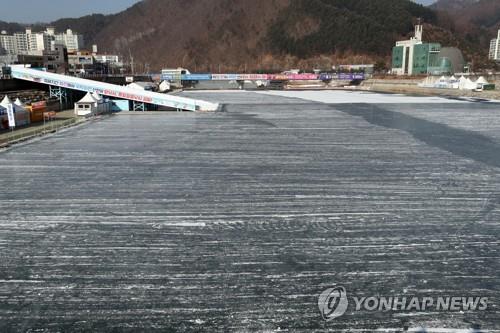 According to county officials, the ice is now about 20 centimeters thick in the upper reaches of the ice fishing festival site.

The county plans to prepare ice fishing holes, fish-roasting zones and a sledding site for foreign visitors in the upstream areas. It already released sancheoneo there Friday.

The gaps between the ice holes will be wider than usual, and safety fences will be reinforced in order to further ensure the safety of foreign visitors, it explained.

County officials expect a crowd of about 1,000 foreign tourists on Saturday, estimating that individual foreign visitors using free shuttle bus rides from Seoul to Hwacheon may account for 30 to 40 percent of the total.

Last year, the festival drew 1.84 million tourists during its 23-day run, marking an increase of 6 percent from the previous year. The number of foreign visitors also set a new record of 146,000, with some 20,000 of them being individual tourists from about 40 countries.