WASHINGTON, Jan. 3 (Yonhap) -- The United States will consider resuming military exercises with South Korea that have been suspended depending on North Korea's next move, the Pentagon chief has said.

U.S. Defense Secretary Mark Esper made the comment in an interview with MSNBC Thursday after North Korean leader Kim Jong-un threatened in a New Year's message to soon showcase a "new strategic weapon."

Experts have said the strategic weapon could be an intercontinental ballistic missile intended to pressure the U.S. to make concessions in the two countries' stalled denuclearization talks. 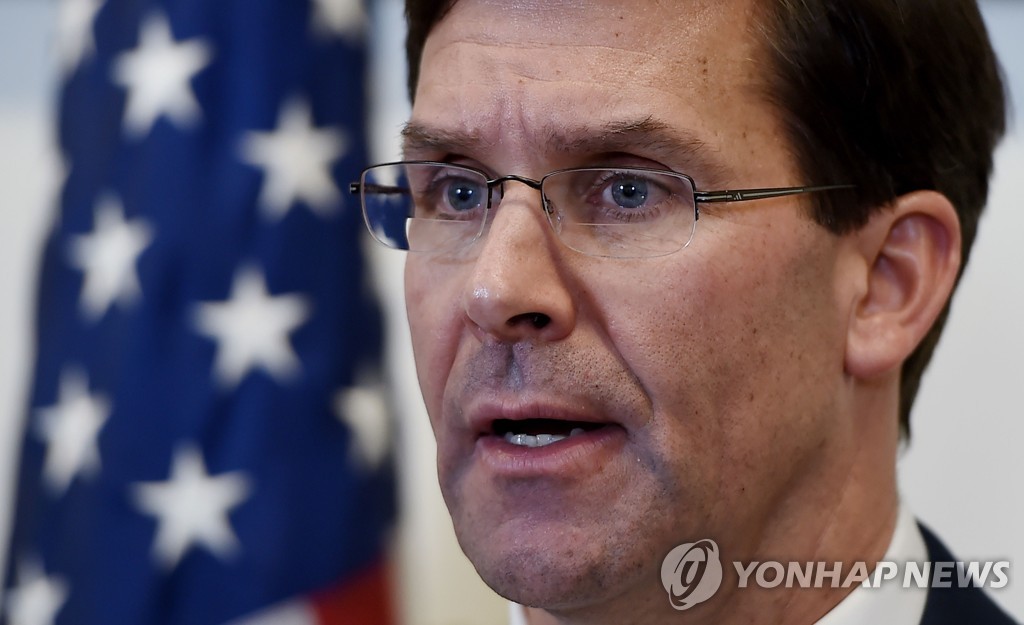 "Well, that's something we will take a look at, certainly, depending on Kim Jong-un's next move," Esper said when asked if it is time to resume the suspended exercises with South Korea. "It is true that we did scale back exercises because we wanted to keep the door open, or open the door for diplomacy. And I think that's the right way to proceed. In no way, shape, or form did it affect our fundamental ability to fight and win against North Korea. But those are things we would look at over the coming months as events unfold on the ground."

The suspension or scaling back of certain exercises was meant to support the denuclearization negotiations because North Korea has denounced the drills as rehearsals for an invasion of the regime.

But Kim complained in his New Year's message that the allies continue to conduct their exercises and suggested he therefore saw no reason to be bound by his self-declared moratorium on nuclear and ICBM tests.

"We continue to urge the North Koreans to get back to the diplomatic table," Esper said. "We believe that a solution can be found. The best path forward with regard to making sure that North Korea, or the Korean Peninsula, is denuclearized is through a political agreement."

Kim and U.S. President Donald Trump have met three times since June 2018 to try to reach a deal on dismantling the North's nuclear weapons program in exchange for U.S. sanctions relief and security guarantees.

The two sides have been at an impasse in their negotiations for almost a year due to wide gaps over how to match their steps.

Pentagon chief: U.S. will look at resuming military drills with S. Korea depending on N.K. move

Pentagon chief: U.S. will look at resuming military drills with S. Korea depending on N.K. move