SEOUL, Jan. 5 (Yonhap) -- North Korea held a massive rally in Pyongyang on Sunday in the latest move to show its unity amid nuclear tensions with the United States.

Hundreds of thousands of North Koreans marched at Kim Il-sung Square, with some of them holding pickets calling for unity, among other things.

The participants, including Premier Kim Jae-ryong, pledged to thoroughly carry out tasks set forth at the recent crucial party meeting. 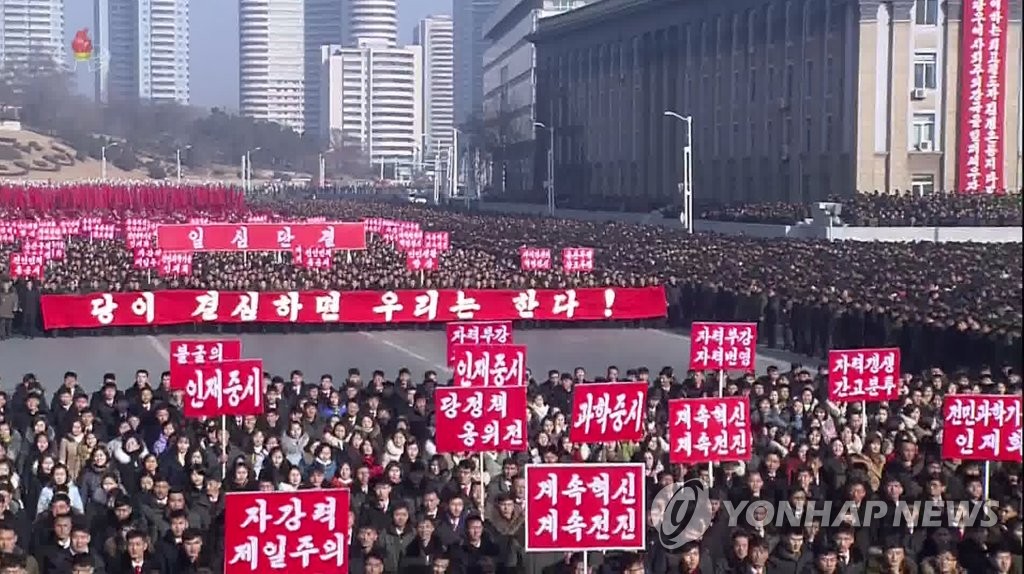 North Korean officials "emphasized that they would bring about a rich harvest year after year to upset the hostile forces keen on the moves to put sanctions on the DPRK to stifle it and thus deal a heavy blow at the enemies," the North's official Korean Central News Agency said in an English-language report, using the acronym of the North's official name, the Democratic People's Republic of Korea.

North Korea has been under tightened U.N. sanctions, as well as separate U.S. sanctions, over its nuclear tests and its long-range rocket launches.

North Korea has repeatedly sought the lifting of sanctions, but the U.S. has demanded that Pyongyang take sweeping denuclearization steps, insisting that sanctions relief will follow substantive progress in its denuclearization.

North Korea frequently organizes massive rallies to demonstrate its unity to the outside world in times of crisis.

The latest rally comes amid rising tensions between North Korea and the U.S. over Pyongyang's nuclear and missile programs.

Last week, the North's leader Kim Jong-un said the world will witness North Korea's new strategic weapon, noting there is no reason to keep its self-imposed moratorium on nuclear and long-range missile tests.

Kim has also accused the U.S. of taking a "brigandish attitude" in their negotiations with demands hurting "the fundamental interests of our state." Even if sanctions relief is necessary for economic development, the North "can never sell our dignity," Kim said.

The two sides held working-level talks in October but failed to narrow their differences.