"Once you overcome the one-inch tall barrier of subtitles, you will be introduced to so many amazing films," Bong said through an interpreter when accepting the trophy. "Just being nominated along with fellow amazing international filmmakers was a huge honor. I think we use only one language: the cinema."

Meanwhile, "1917" and "Once Upon a Time in Hollywood" earned the Golden Globes' best motion picture for drama and musical or comedy, respectively.

Joaquin Phoenix won best actor for his performance in "Joker" and Renee Zellweger was awarded best actress for "Judy," while the honors of best supporting actor and actress went to Brad Pitt for "Once Upon a Time in Hollywood" and Laura Dern for "Marriage Story," respectively.

Awkwafina, born to a Chinese-American father and a South Korean mother, was named best actress in a comedy or musical film for her role in "The Farewell," directed by Lulu Wang. She became the first woman of Asian descent to win the award.

"Parasite" was shortlisted for best international feature film at the upcoming Academy Awards. It was also included on the 15-film shortlist in the original song category for "A Glass of Soju."

The final five nominees for the awards will be announced on Jan. 13, and the award-giving ceremony is slated for Feb. 9.

"I am very happy in many ways. I am glad about the fact that it is the first (Korean movie to win a Golden Globe award), and that the movie is receiving positive reactions and winning awards as it is being released in North America," Bong said during a meeting with Korean reporters later in the day.

"If we receive another good result at the Oscars, that would also mean something for the South Korean movie industry," Bong added.

"As there are many great movie directors (in South Korea), I believe more (South Korean) movies will touch the hearts of moviegoers around the globe," Song said.

"We could not have achieved the big success and honor without the enthusiastic support, sharp insight and love from South Korean audiences," he added. 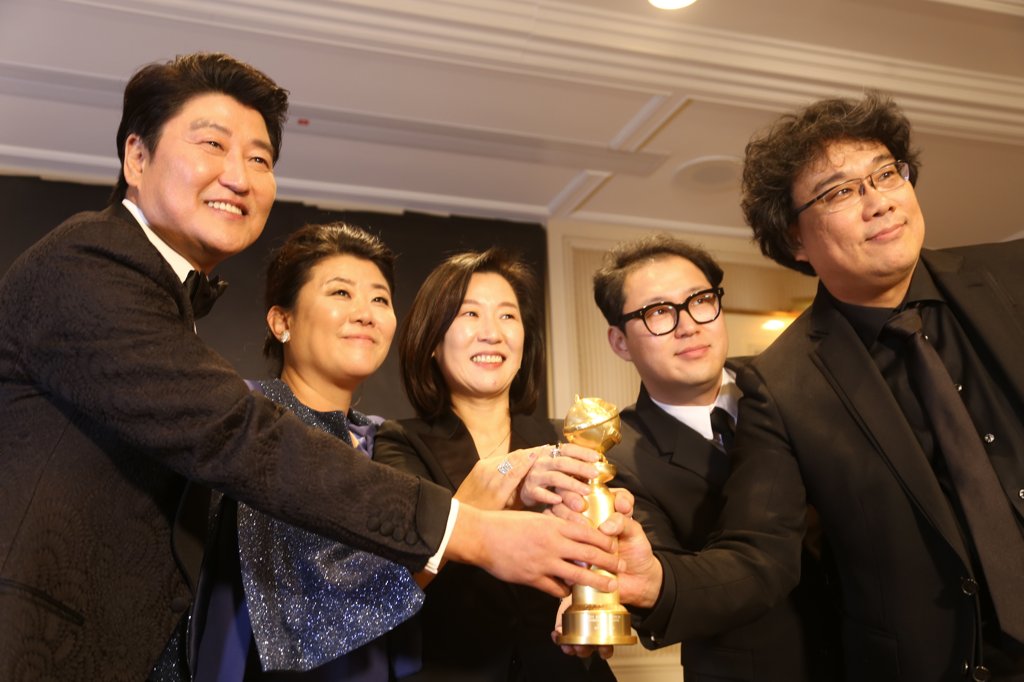 Culture Minister Park Yang-woo sent a message to Bong in celebration of the Golden Globe victory.

"Winning the latest award is very meaningful as it is a feat achieved in the U.S., the biggest cinema market in the world," Park was quoted as saying in the message released by the ministry.

"It's another great feat, following the winning of the Palme d'Or, that overcame cultural and language barriers to promote the originality and artistry of Korean cinema worldwide," he said.