SEOUL, Jan. 6 (Yonhap) -- The growing specter of war between the United States and Iran after Washington's slaying of a top Iranian general is injecting fresh uncertainty into the stalemated nuclear talks with North Korea, with the Middle East conflict gobbling up America's policy attention.

The upsurge in the tensions from Friday's fatal drone strike on Gen. Qassem Soleimani, the head of Iran's elite Quds Force, came as the North's threat to showcase a "new strategic weapon" is feared to jeopardize the already troubled U.S. diplomacy for its denuclearization.

The targeted killing of the architect of Tehran's proxy war strategy has stoked fears of war, as Iran's Supreme Leader Ayatollah Khamenei threatened harsh revenge with U.S. President Donald Trump warning of counterstrikes in the case of an attack on "any Americans or American assets."

"When tensions surge in the Middle East, the U.S. is likely to focus largely on managing the status quo in another region, namely East Asia or the Korean Peninsula, given that it is difficult to prepare for two conflicts in two regions at the same time," said Park Won-gon, professor of international politics at Handong Global University.

"When it comes to the North Korean issue, the Trump administration's policy interest or attention cannot help but dwindle, and it is likely to focus on maintaining the current situation and preventing the North from making further trouble," he added. 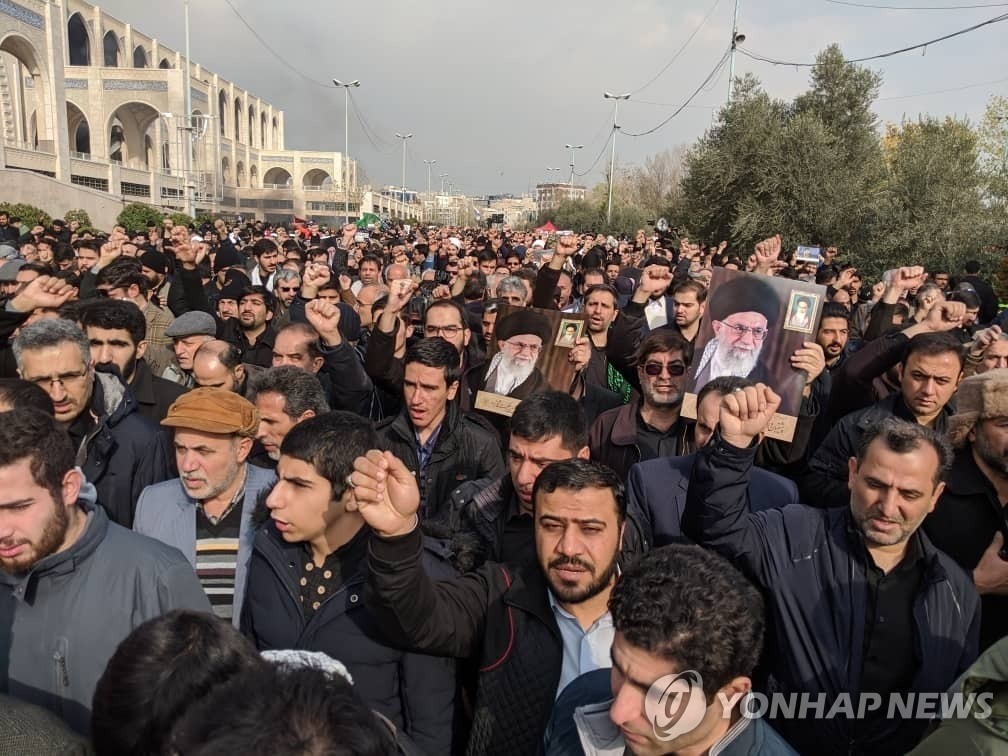 The U.S.' refocusing on the increasingly volatile Middle East followed Pyongyang's calls for concessions from Washington in the stalled nuclear talks -- calls that were laced with veiled threats of military provocations such as launching an intercontinental ballistic missile (ICBM).

In his New Year's message at a key ruling party gathering last week, North Korean leader Kim Jong-un said the world will witness a "new strategic weapon" in the near future and warned of a "shocking actual action" while accusing the U.S. of stalling for time in pursuit of its own political interests.

But the acute Middle East tensions are overshadowing Kim's message apparently designed to galvanize U.S. action to break the logjam in the nuclear negotiations.

Since Soleimani's demise, Washington has been consumed with handling the aftermath, and Tehran further aggravated tensions Sunday by announcing it would no longer comply with the limits under the landmark 2015 nuclear deal that Washington withdrew from in 2018.

Further compounding the policy challenge to the U.S. is the Iraqi parliament's resolution calling for the pullout of American troops from its soil -- a scenario likely to undermine America's strategic position in the region amid other major powers' pursuit of greater influence there.

Over the last decade, the U.S. has tended to avoid simultaneous military entanglements in two separate regions -- an apparent departure from the "Two Major Regional Conflicts (MRC)" concept.

This U.S. strategic concept, formulated after the end of the Cold War, was designed to ensure the American military capability to fight and win two major wars in regions such as East Asia and the Persian Gulf.

But Washington -- now focusing on conserving national power to counter the rise of potential geopolitical rivals such as China -- is thought to lean toward the "one plus" strategy in which the U.S. seeks to win a war in one region while deterring another in a second region.

Despite the likelihood of the U.S. being sidetracked by one regional conflict, analysts say that the U.S. would step up its engagement with the North at least to prevent the recalcitrant regime from veering off the dialogue track.

As Trump is gearing up for a full-fledged re-election battle, he has continued to leave the door open for negotiations with the North, apparently on concerns that a policy failure on the North Korean issue could make his foreign policy scorecard look bad.

Trump has regarded Pyongyang's self-imposed moratorium on nuclear and ICBM tests as a key foreign policy achievement. However, the North Korean leader hinted at the possibility of ditching that ban, pressuring the U.S. to abandon what he calls its "hostile policy" toward the communist regime.

It remains uncertain whether Trump would be willing to give ground in the negotiations with the North to forestall its scrapping of the moratorium, even though he would try to maintain a fragile peace effort with the North, analysts said.

"In the months leading to the November election, President Trump may not want to be seen as making a concession to the North," said Koh Yoo-hwan, a North Korean studies professor at Dongguk University.

"But the North may find it difficult to launch a major provocation as a way to pressure the U.S. It could rather be preparing for a protracted struggle against the U.S.," the professor added.

The U.S. and the North last held working-level nuclear talks in Sweden in October. But the negotiation ended fruitlessly with Pyongyang accusing Washington of having come to the negotiating table empty handed.

The no-deal meeting could have a silver lining for the future talks as the two sides deepened their understanding of what each other wants in order to make progress in a give-and-take process.

Some observers pointed out that the high-value target killing of the Iranian commander, approved by Trump, might have sent out a stern warning to the North that the U.S. could use a military option if its national interests are compromised in a conflict.

Yet this case can hardly be applied to the North Korean case, others noted, given that such a deadly military operation is unthinkable considering the apparent opposition from countries like China and potential ramifications, such as instability in the North that could destabilize the peninsula and beyond.

Meanwhile, the escalating conflict between the U.S., South Korea's security ally, and Iran, its trading partner, has posed a series of foreign policy challenges to Seoul, including protecting its nationals in the Middle East and maintaining stable oil supplies for local industry.

The challenges also include the U.S. call for the South to contribute to maritime security operations in the Strait of Hormuz at a time of concern that Iran could carry out a blockade around the strait in retaliation for the killing of the general.