SEOUL, Jan. 6 (Yonhap) -- South Korea vowed Monday to work closely with the international community to swiftly respond to any contingencies related to the safety of its people in the Middle East amid simmering tensions between the United States and Iran.

Fears have grown over imminent military conflicts between the U.S. and Iran after top Iranian military commander Qassem Soleimani was killed in a U.S. drone strike last week. Iran has warned of severe revenge for the attack, and even pledged to abandon the 2015 nuclear deal with the U.S. and other world powers.

"The government has been closely watching developments in the Middle East regarding the incident between the U.S. and Iran. In order to swiftly respond to contingencies related to the safety of our people, we will closely cooperate with the international community," defense ministry spokesperson Choi Hyun-soo said at a regular briefing.

Asked to elaborate on the "swift" actions, the official said, "We've been discussing what will be the most effective way."

South Korea's possible troop deployment to the Strait of Hormuz has drawn keen attention here, as the country has been reviewing diverse options, at the request of the U.S., as to what role it can play to contribute to safeguarding the strategic waters off Iran.

"As for the military coalition in the Strait of Hormuz, no decision has been made so far. We are looking into diverse options to protect our people and vessels there," Choi noted.

One of the most probable options for South Korea appears to be broadening operational areas of its Cheonghae Unit, which is on an anti-piracy mission in the Gulf of Aden off Somalia.

The 31st batch of the Cheonghae Unit departed the southern port city of Busan on Dec. 27 for the Gulf of Aden for a six-month mission. The 300-strong contingent along with the 4,400-ton destroyer, the Wang Geon, is expected to arrive in the region in mid-January, according to the Navy.

The Gulf of Aden is around four days' sail from the Strait of Hormuz.

According to a ministry official, parliamentary approval would not be required as long as additional forces or weapons are not added.

"Expanding Cheonghae's role to the Strait of Hormuz would not require parliamentary consent, as law stipulates that the unit shall carry out missions in the Gulf of Aden and its surrounding regions," the official said, adding that related agencies have carried out legal reviews into various scenarios.

As the world's single most important oil passageway that forms a choke point between the Arabian Gulf and the Gulf of Oman, the strait is the route to the open ocean for more than one-sixth of global oil production and some 70 percent of South Korea's oil imports. 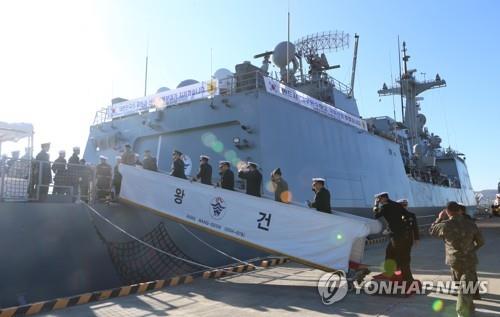