INCHEON, Jan. 6 (Yonhap) -- The number of smuggling cases via the sea in South Korea came to 88 last year, with their approximate street value reaching a record high of 420 billion won (US$359.89 million), the Coast Guard said Monday.

During the reported year, the Coast Guard arrested three people and booked 78 people without detention.

The street value of drugs, farm products and others seized in the sea smuggling cases marked the highest level since the Coast Guard was launched in 1996 as an independent body, separate from the National Police Agency.

By item, pharmaceutical goods topped the list of smuggled goods, with 39 cases, followed by agricultural and marine products with 22 cases, tobacco with 15 cases, counterfeit products with six cases and drugs with one case.

The maritime police agency attributed the rise in sea smuggling to a record 100 kilograms of cocaine that it seized from a freight vessel at a port in Taean on South Korea's east coast in August last year.

The cocaine seized in the investigation, with an estimated street value of 300 billion won, was around the equivalent of 3.3 million doses. 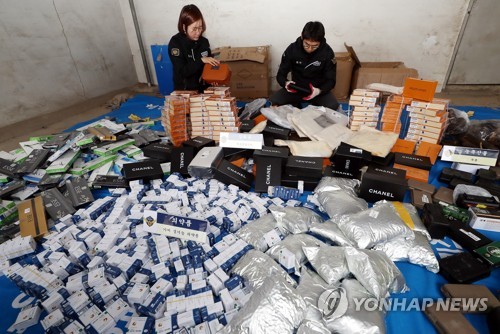