As part of the plan, the government will provide 36 trillion won (US$30.7 billion) in financial support, up 3.3 trillion won from the previous year, the Ministry of Economy and Finance said in a statement.

The government will also roll over 54 trillion won worth of debt owed by smaller firms and merchants, the ministry said.

The debt roll-over will be available through state-run lenders including the Korea Development Bank, Industrial Bank of Korea and Korea Finance Corp.

The plan comes as the government pushes to stabilize the livelihoods of ordinary people ahead of the Lunar New Year holiday, which begins on Jan. 24. 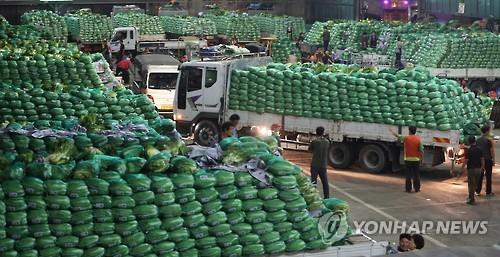 The government usually expands liquidity ahead of the Lunar New Year holiday and Chuseok, the South Korean autumn harvest festival.

Finance Minister Hong Nam-ki has said the government will redouble efforts to spur economic recovery this year as it seeks to promote investment and private consumption.

Hit by a lengthy U.S.-China trade war and a cyclical slump in the memory chip sector, South Korea's economy is poised to report its weakest annual growth in a decade for last year.

More liquidity to be funneled into small firms, merchants ahead of holiday

More liquidity to be funneled into small firms, merchants ahead of holiday