SEOUL, Jan. 6 (Yonhap) -- The number of fires and fire deaths in South Korea fell last year from the previous year, but the volume of property damage caused by fires surged to a record volume, according to data released by a government agency Monday. 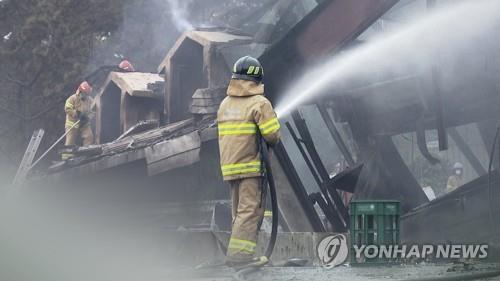 The number of fire deaths and injuries dropped 23 percent, or 85 persons, and 0.3 percent, or six persons, respectively, from the previous year.

By contrast, property damage caused by fires soared 44 percent on-year to an all-time high of 805.9 billion won (US$688 million) in 2019, the agency noted, attributing the surge to a number of large fires, including a series of mountain fires in Gangwon Province and a traditional market fire in Seoul.

On a daily average, there were 110 fires, 0.8 fire fatalities and 2.2 billion won in fire property damage last year, it said.

The agency said carelessness accounted for 50.3 percent of the causes of fires, while electrical and mechanical problems accounted for 23.4 percent and 10 percent, respectively.

"South Korea's fire death rate of 0.6 is smaller than 1.0 in the United States and 1.2 in Japan but bigger than 0.4 in the Netherlands. The government will more closely analyze fire statistics to further lower the fire death rate and work out preventive measures," an official at the National Fire Agency said.