The class satire was named best foreign language film at this year's Golden Globes Awards ceremony on Sunday (U.S. time), becoming the first South Korean movie ever to receive a prize from the Hollywood Foreign Press Association, which organizes the annual awards.

It was also nominated in the best director and screenplay categories at the Golden Globes, but those trophies were taken by Sam Mendes for "1917" and Quentin Tarantino for "Once Upon a Time in Hollywood," respectively.

The Golden Globe award is one of the biggest that "Parasite" has collected since it was named the winner of the Palme d'Or, the top honor of the Cannes Film Festival, in May. It was the first South Korean-made film to take Canne's highest prize. 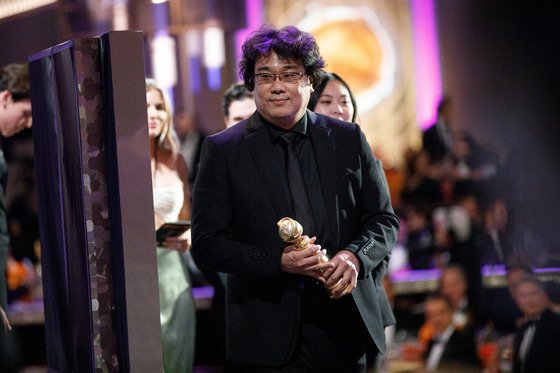 Bong's interpretation of capitalism and income inequality and his genre-bending direction and cinematography have won rave reviews from mainstream U.S. cinema critics.

"'Parasite' highlights the conflict between haves and have-nots, or struggles among the poor, embellished by Bong's own tones of black comedy," film critic Yoon Sung-eun said. "It appealed to Asia and Europe, and now the mainstream U.S. film industry has recognized it."

On top of the critical acclaim, the film also experienced great commercial success stateside. Since its U.S. release in October, the film has grossed over US$23 million in America, becoming the best-selling Korean-made movie in the U.S. and the most popular subtitled film of the year.

In the best director section, he was listed with Sam Mendes, Quentin Tarantino, Todd Phillips, who directed "Joker," and Martin Scorsese of "The Irishman."

Moreover, the Golden Globes win boosts the Oscar odds for "Parasite," as the awards are regarded as a strong predictor in the Academy Awards race.

"Parasite" has been shortlisted for best international feature film at the upcoming Academy Awards and was also included in the 15-film shortlist of the original song category for "A Glass of Soju."

Many anticipate that "Parasite" will easily make the five-film final nominations for the best foreign-language category, set to be announced on Jan. 13, with possible nods for best picture, best director and best screenplay as well. 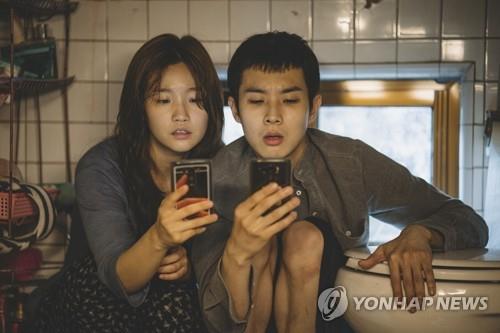