(ATTN: UPDATES throughout with more remarks by adviser; CHANGES photo)
By Lee Haye-ah

Moon Chung-in spoke at a public seminar in Washington, saying the ongoing stalemate may force South Korea to break from its alignment with the U.S. and pursue an independent path toward inter-Korean economic cooperation.

"The United States needs to be more flexible and realistic," he said at the Center for the National Interest. "You cannot really pursue the strategy of 'You denuclearize first, and we'll reward you.' That won't work."

The U.S. has insisted that North Korea first take significant steps toward dismantling its nuclear weapons program before Washington offers sanctions relief and other concessions sought by Pyongyang.

North Korea has balked at the demands, saying the U.S. should first withdraw its "hostile policy" toward Pyongyang. 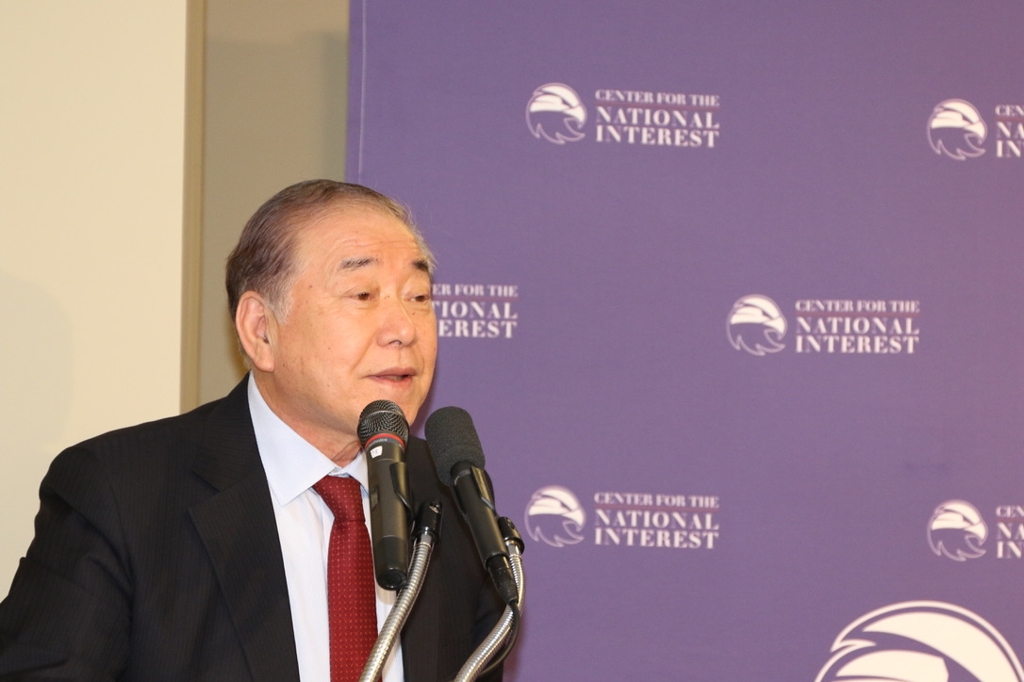 "There's a complete parallel between Washington and Pyongyang," the adviser said. "Both sides need to come up with some kind of compromise approach. And also, the United States needs to be more bold."

With regard to any inter-Korean economic cooperation, he said, Seoul has been "100 percent" transparent with Washington under the international sanctions regime against Pyongyang.

"Overall sentiment in South Korea is this: If the U.S. fails to reopen negotiations with North Korea, and come up with some kind of negotiated settlement with North Korea, a lot of Moon Jae-in's supporters are now raising voices that South Korea should take independent action," the adviser said. "South Korea is a democracy and Moon Jae-in needs continued support from his supporters. If President Moon cannot deliver to his supporters, then he would face a political dilemma."

President Moon has sought to build a permanent peace regime on the Korean Peninsula by simultaneously pursuing the North's denuclearization and inter-Korean reconciliation, including through projects to reconnect railways and roads.

Speaking in a private capacity, the adviser said he expects the president to say in his upcoming New Year's speech that South Korea will continue to "rely on" the U.S. to solve the North Korean nuclear problem.

"But I don't know to what extent he can really go along that line," he said.

Options would include signing a peace treaty with North Korea, a phased reduction of U.S. forces in South Korea in return for North Korea's denuclearization, and providing sanctions relief with a "snapback" clause to ensure that the sanctions are reimposed in the event the North reneges on its commitments, he said.

Another option, he suggested, was to amend a recent draft U.N. Security Council resolution proposed by China and Russia on easing sanctions on North Korea.

He said the current proposal is "flawed" because it does not require North Korea to take denuclearization steps but that the U.S., Britain and France can seek a creative solution.

The denuclearization talks have stalled since a second summit between U.S. President Donald Trump and North Korean leader Kim Jong-un in February 2019 ended without a deal.

Kim expressed frustration in a New Year's message, saying he no longer felt bound by his own moratorium on nuclear and intercontinental ballistic missile tests, and threatening to soon showcase a "new strategic weapon."

"The United States has heard North Korean grievances sufficiently and now it's time for North Korea to come back to the negotiation table and try to find some kind of a negotiated settlement," Moon, the adviser said. "What I want to emphasize is: Let us not be too rigid. Let us be flexible. Let us not be driven by inertia."