LAS VEGAS, Jan. 6 (Yonhap) -- LG Display Co., a major display panel maker in South Korea, is likely to make a turnaround in the second half of the year on the back of increased production capacity for TV-sized OLED sheets, the company's CEO said Monday.

LG Display's operating losses were projected to have surpassed 1 trillion won in 2019 due to falling LCD prices and massive investment in OLED facilities.

"I know we're in a difficult situation, but I'm confident of our technology and the talent we have," Jeong Ho-young, who took over position in September, said at a press conference ahead of this year's Consumer Electronics Show (CES) in Las Vegas, Nevada. "If we can execute our targets, I think we can recapture the No. 1 spot in the global display sector." 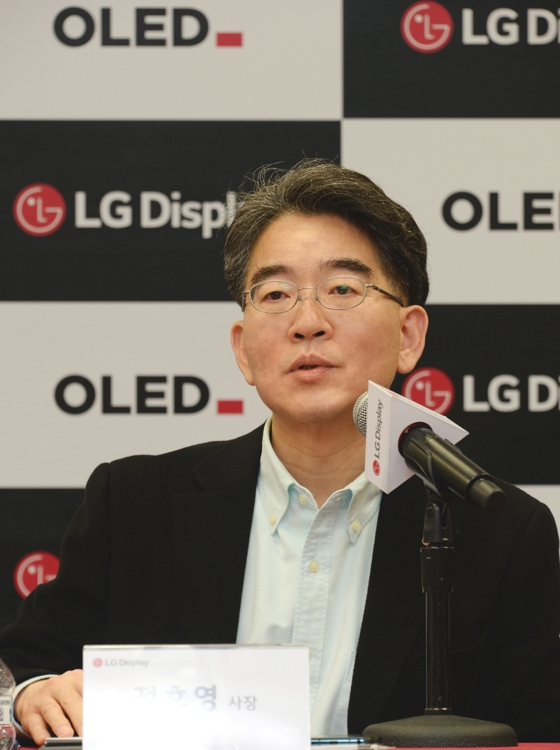 Jeong said the company's earnings will improve once its plant in Guangzhou, China, starts mass production. The plant will have a monthly capacity of 60,000 OLED sheets.

"It's true that we had some delays in Guangzhou, but that's because we were working to upgrade its yield rate," he said. "The plant will be able to mass produce no later than the first quarter of the year."

Jeong added that the company's profitability is getting better with improved cash flows.

"Over the last three years, we spent 22 trillion won (US$18.8 billion) in setting up and upgrading our facilities, but for the next two years, we will not make such massive investment," he said. "Our investment for this year is likely to be around 3 trillion won."

Due to a supply glut in the LCD sector, Jeong said his company will focus on securing competitiveness in the WOLED market and boosting its pOLED business.

"We aim to sell at least 6 million OLED panels for TVs this year, which is double what we sold in 2019," he said. "In the OLED business, I think we should achieve at least a 10 percent profit margin, and to do so, we have to make more differentiated products."

Jeong said the expansion of OLED screens in the global display market is "inevitable," since many companies are jumping on the bandwagon.

"Our customers are expanding their OLED products and we're also seeing that our competitors expanding their OLED investment plans," he said. "OLEDs are expected to make up 20 percent of the total TV market this year in terms of sales value, and their presence could increase up to 30 percent in the next two or three years."

For pOLED products, Jeong said it sees a positive future since there will be high demand in the automotive sector.

Jeong added a vehicle equipped with its pOLED display will be launched in the second quarter of this year, though he didn't unveil the name of the car or its manufacturer.

"We sold 1 trillion won worth of automotive displays in 2017, and next year, the figure may reach around 2 trillion won," he said. "I think 30 percent of our sales should come from the transportation sector, including automobiles and aircraft."

While beefing up its OLED production, Jeong said the company will make some adjustments in its LCD business.

"Our OLED businesses, WOLED and pOLED, will make up 40 percent of our sales next year and 50 percent next year," he said. "We plan to halt LCD TV screen production in South Korea after this year."