SEOUL, Jan. 7 (Yonhap) -- Defense Minister Jeong Kyeong-doo said Tuesday that the military is fully prepared for any provocations by North Korea as the regime has warned of a "new strategic weapon."

In protest over the stalled denuclearization negotiations with the United States, Pyongyang warned last week that the world would witness a "new strategic weapon" in the near future and pledged to take a "shocking actual action."

"Our military takes the current situation very seriously," Jeong said on a military radio program when asked about his assessment of the threats. It is the first comment regarding the issue by the South Korean defense chief.

"Whatever situations take place, I can tell you with confidence that we are fully prepared to deal with them," he stressed.

Noting that the North has increased military movements recently, Jeong called on service persons to be on high alert while keeping a close tab on the communist country.

Last year, North Korea fired 25 projectiles, including short-range ballistic missiles and an SLBM, during 13 rounds of weapons tests, though it has not launched an ICBM since November 2017.

The communist country also carried out artillery firing drills on the western border island of Changrin in November in violation of the 2018 inter-Korean military pact, and conducted rocket engine tests twice at the Dongchang-ri site the following month, which were believed to be part of its development of ICBMs.

Speaking about the broader regional security situation, Jeong said neighboring countries have only been seeking their own national interests and are expected to continue building defense capabilities in order to achieve strategic superiority.

"While setting the Indo-Pacific region as its priority theater, the U.S. is also likely to continue calls on countries in the region to play greater roles and shoulder increased burdens," the minister said.

The U.S. has demanded a hefty rise in Seoul's payments in the ongoing negotiations between Seoul and Washington on renewing a cost-sharing deal for the upkeep of U.S. troops in South Korea. It has also called on Seoul to join a coalition to safeguard the Strait of Hormuz. 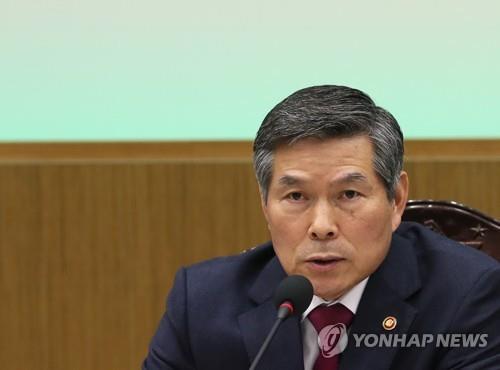