SEOUL, Jan. 7 (Yonhap) -- The global semiconductor market will likely rebound in the second quarter as manufacturers struggle to ease a supply glut that has pushed down prices, an industry report said Tuesday.

Hana Institute of Finance said in the report that the fluctuations and downturn in the semiconductor sector were largely due to oversupply.

"Last year's sluggish chip exports and poor earnings by chipmakers were not due to a drop in sales but to price drops driven by oversupply," the report said. 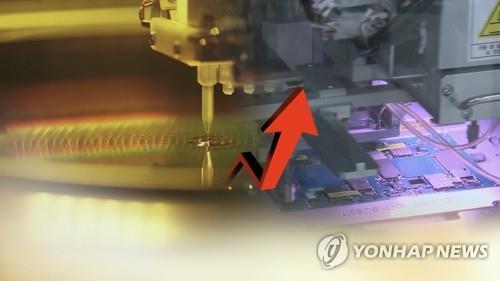 The institute said price drops have recently moved to ease, suggesting that price adjustment is in the last stage.

"Exports and corporate earnings will still remain weak due to a base effect, but recovery will start in the second quarter," the report said.

In the face of the protracted trade row between the United States and China and a drop in chip prices, the country's exports have dropped for 13 consecutive months since November 2018.

The U.S. and China are South Korea's top two trading partners, and semiconductors account for more than one-quarter of the country's overall exports.

Samsung Electronics, the world's largest memory chipmaker, is also expected to see its earnings improve this year after bottoming out in the fourth quarter of last year, according to other industry reports. The tech giant is scheduled to announce its fourth-quarter earnings guidance on Wednesday.

SK hynix is also looking forward to better earnings this year after a year of decline in sales and profit margins.

The two firms accounted for more than 60 percent of the global memory market in 2018.
(END)