SEOUL, Jan. 7 (Yonhap) -- A former CEO of Samsung C&T Corp. was summoned by prosecutors on Tuesday, as they are stepping up investigations into suspicions surrounding the company's controversial merger with Cheil Industries Inc. in 2015.

Kim Shin, who served from 2010-2018 as CEO of Samsung C&T, a construction and trading arm of Samsung Group, appeared before prosecutors at the Seoul Central District Prosecutors Office as a criminal suspect in their probe into alleged illegalities in the merger of the two Samsung companies in September 2015.

Prosecutors suspect that Kim and others in Samsung management intentionally lowered the value of Samsung C&T prior to its merger with Cheil Industries to help benefit Samsung Group heir and Samsung Electronics Vice Chairman Lee Jae-yong in his managerial succession from his ailing father Lee Kun-hee.

Lee Jae-yong was the largest shareholder in Cheil Industries, an affiliate that produces textiles, chemicals and electronic chemical materials, with a stake of 23.2 percent, which means a fall in the valuation of Samsung C&T paves the ground for a merger ratio advantageous to the Samsung heir.

At that time, Samsung C&T was suspected of downsizing the volumes of its overseas construction orders and domestic housing construction contracts. Samsung C&T also reported an 11 percent decrease in its sales in the first half of 2015 and suffered steady falls in its stock prices, which led to a merger ratio of 1:0.35 favorable to Cheil Industries. 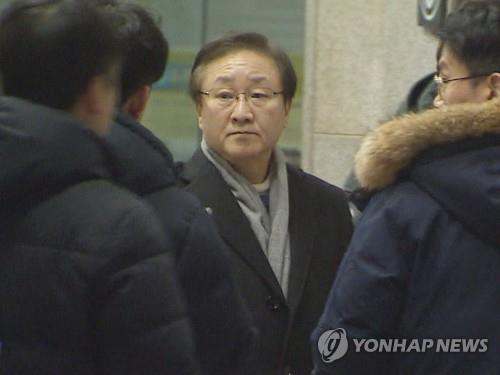 Through the merger, Lee Jae-yong was able to secure control of Samsung C&T, a de facto holding company of Samsung Group.

Prosecutors planned to grill Kim about the background of the company's devaluations and possible group-level interventions in the alleged moves, but they allowed him to leave the prosecutors office very early due to the status of his lawyer.

Prosecutors reportedly viewed Kim's lawyer as "unsuitable" as the unidentified person concurrently serves as a legal representative of Samsung C&T, considered a victim in this case.

Kim will likely be questioned by prosecutors later after selecting a new lawyer.

He has become the first CEO-level official to be summoned by prosecutors in their ongoing probe into the Samsung merger case.

Meanwhile, prosecutors are also looking into suspected inflation in the value of Cheil Industries ahead of its merger with Samsung C&T. For instance, the official land value of Everland, the nation's largest theme park owned by Cheil, surged 370 percent in 2015.

Prosecutors plan to call in a number of former top Samsung executives to question them about suspicions surrounding Cheil and its merger with Samsung C&T.

In a related move, prosecutors have nearly completed investigations into suspected window dressing by Samsung BioLogics in 2015 allegedly orchestrated by Samsung Group to overvalue Cheil's stake in the conglomerate's bio business. They are considering indicting and referring all Samsung executives and officials, including those involved in Samsung BioLogics' alleged window dressing, for trial.