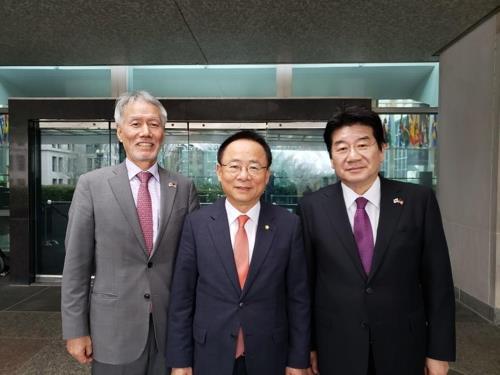 "There is no change in the position that (North Korea's) denuclearization must be achieved," Lee, who is also deputy speaker of the National Assembly, told reporters after the meeting, referencing the U.S. goals of complete, verifiable and irreversible denuclearization (CVID) and final, fully verified denuclearization (FFVD).

"Under no circumstances will (the U.S.) accept (North Korea) as a nuclear weapons state," he added of the U.S. officials' comments.

Washington has sought to dismantle Pyongyang's nuclear weapons program in exchange for sanctions relief and security guarantees, but negotiations have stalled amid wide gaps over how to match their steps.

Lee said the U.S. side gave his delegation assurance that South Korea can have full confidence in the U.S. nuclear umbrella.