The Bank of Korea and the Financial Services Commission also joined a separate government task force meeting to assess any fallout from the latest geopolitical risks and discuss countermeasures. 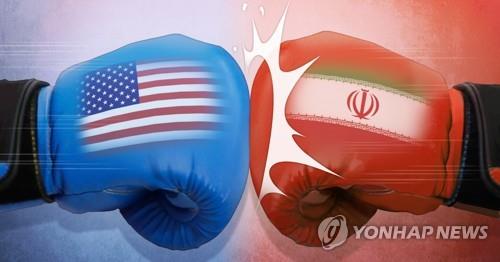 "The prevailing view is that the U.S.-Iran conflict will not lead to an all-out war, but there still remains the possibility of increased volatility in the local financial and foreign exchange markets," BOK Deputy Gov. Yoon Myun-shik said in a statement released after an emergency meeting in Seoul.

"The BOK will take market stabilization measures if necessary, while closely cooperating and sharing its information on market conditions with the government," the statement added.

The meetings followed reports of Iranian missile attacks against U.S. military bases in Iraq in retaliation against the U.S. killing of a top Iranian general late last week.

Global stock markets fluctuated after the United States said it had killed Qassem Soleimani, the head of Iran's elite Quds Force, in a drone attack.

Washington has warned of additional strikes against multiple Iranian targets in case of retaliation by the Middle Eastern country.

The local currency earlier dipped more than 10 won per dollar but recovered some ground after Seoul officials vowed swift steps in the case of increased volatility.

The benchmark Korea Composite Stock Price Index, or KOSPI, was down more than 1 percent.

Seoul's Finance Minister Hong Nam-ki earlier said the government will intervene if necessary, but insisted it was too soon to determine such a need.

"In the case of any abnormal situation, the government will cope with the situation in line with contingency plans," Hong told a meeting of economy-related ministers earlier in the day.

"It is still too early to determine if the Iran situation has directly led to the increased volatility in the foreign exchange and stock markets," he was quoted as saying.

South Korea said the financial exposure of its banks, securities firms and insurance companies to Iran was tallied at US$200,000 at the end of September last year.