SEOUL, Jan. 8 (Yonhap) -- Unseasonably warm winter weather is wreaking havoc for the organizers of various ice and snow festivals set to begin later this month in the mountainous northeastern province of Gangwon.

Traditionally, Gangwon, located east of Gyeonggi Province, which surrounds Seoul, is a mecca of winter sports and snow and ice themed festivals, due to its frigid winter weather.

This winter, however, an extended spell of unseasonably warm weather has hit the province hard, embarrassing the organizers of wintertime festivals, including the Hwacheon Sancheoneo (Mountain Trout) Ice Festival. 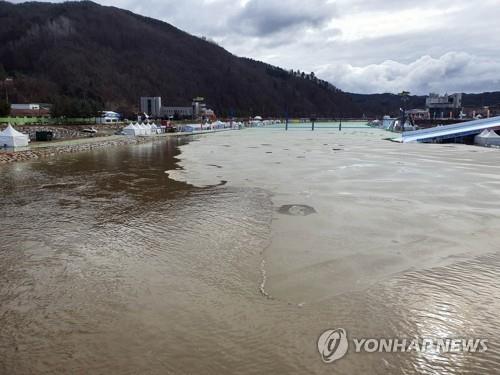 According to the Korea Meteorological Administration (KMA), daily lows in Gangwon have ranged from 2 C to 8 C, with the daily high temperature rising to 9 C in some regions of the province on Wednesday.

The temperatures are about 10 C above the province's 30-year average for January, the KMA noted.

Adding to the woes of festival organizers, heavy rain of 30 to 120 millimeters has soaked the province in recent days, putting festival features made of ice and snow at risk of melting.

In Hwacheon, about 120 kilometers northeast of Seoul, county government officials have been making all-out efforts to preserve the ice on the ice fishing venue of the 2020 Hwacheon Sancheoneo Ice Festival ahead of its formal opening slated for Saturday.

The ice fishing festival was originally scheduled to kick off last Saturday but was delayed by one week due to the warm conditions.

On Wednesday afternoon, Hwacheon's county government and festival organizers decided to again postpone the opening of the ice fishing festival, saying they plan to announce a rescheduled opening date after a meeting of relevant officials on Saturday.

About 75 mm of rain fell in Hwacheon over three days from Monday afternoon, flooding the ice fishing venue with muddy water.

"All measures have been taken to protect the festival venue but we have made a difficult decision in the face of natural disaster. We haven't yet considered cancelling the festival and will instead make all possible follow-up measures," Choi Moon-soon, head of Hwacheon County, said.

On Tuesday, about 500 civil servants in Hwacheon were mobilized to prevent rain from flowing into the festival's ice fishing site by using drainage pumps and other tools.

Festival organizers had planned to create about 20,000 fishing holes on a frozen river covering an area about the size of 26 soccer fields, with about 200 tons of "sancheoneo," a species of trout that only lives in very clean fresh water, to be released during the festival. 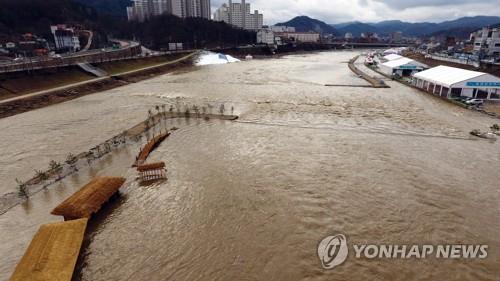 A similar ice fishing festival being prepared in the county of Hongcheon, 100 km east of Seoul -- the Hongcheon Ggong Ggong Festival -- is also in trouble.

Ice on the Hongcheon River, the festival venue, was about 20 centimeters thick until recently, but most of the river ice melted as about 60 mm of rain fell in Hongcheon from Monday to Wednesday.

The festival was originally scheduled to open last Friday but has been postponed by a week. Its organizers say the festival will open on Friday as scheduled, but most of the events will take place indoors.

"The ice fishing venue was damaged by heavy rainfall but its outdoor facilities will be normalized when the river freezes again. The festival will open Friday as planned, with a focus on indoor fishing and experience events," said a Hongcheon official.

The unusually warm winter and dearth of snow has also beleaguered the organizers of the Mount Taebak Snow Festival scheduled to kick off in the city of Taebaek, about 270 km east of Seoul, on Friday.

Municipal officials have already covered 55 snow sculptures being created at Taebaeksan National Park with plastic sheeting, and snow sculpture artists have suspended their work there. 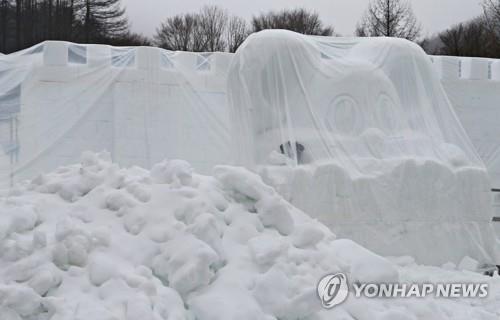 "We're embarrassed at the rainfall ahead of the opening of the snow festival. But we're awaiting good news soon as snow is forecast for next week," a Taebaek municipal official said.

The 2020 PyeongChang Trout Festival began late last month in PyeongChang, about 180 km east of Seoul, but its organizers have decided to suspend the operation of its ice fishing site until Friday because of the warm weather.