SEJONG, Jan. 8 (Yonhap) -- The number of workers killed during working hours declined last year from a year earlier after the government implemented measures to rid industrial sites of accidents that lead to workers' injuries or deaths, the labor ministry said Wednesday.

The death toll from industrial disasters or work-related accidents decreased 11.9 percent from a year earlier to 855 in 2019, the lowest figure since the government began compiling related statistics in 1999.

The Ministry of Employment and Labor also put the number of industrial disaster-related deaths per 10,000 workers at a preliminary 0.5 or lower during the reported year.

In the construction sector, which reports the most workplace disasters, the death toll came to 428, down 57 from the previous year. The number of workers killed in the sector due to falling and collisions, the two main causes for construction workers' deaths, fell by 25 and 19, respectively.

The manufacturing sector saw the death toll decline 11 from a year earlier to 206, with the death toll from accidents in which workers are trapped in machinery, falling by nine.

The ministry attributed the decline to strengthening the government's administrative guidance over measures to rid construction and other industrial sites of accidents that lead to workers' injuries or deaths.

"We have concentrated our efforts on supervising construction companies' measures to prevent falling and other major causes (of accidents) in the industry from taking place," Employment and Labor Minister Lee Jae-kap told a press conference.

The ministry plans to widen the scope of its inspection of industrial sites to check safety measures against workplace accidents to the manufacturing sector.

The revised law on industrial safety that is set to come into force on Jan. 16 is expected to help continue the falling trend of deaths in the workplace.

The law, also named the Kim Yong-gyun law, calls for making companies that outsource jobs with any significant safety risks take more responsibility for workplace accidents than ever. The law revision came after Kim, a 24-year-old contract worker, was killed in a tragic accident while working at a state-run power plant in 2018. 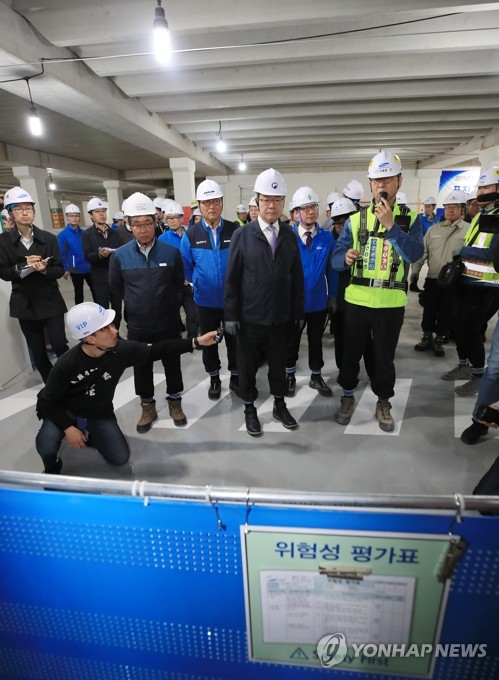 Death toll from industrial disasters falls to 855 in 2019: labor ministry

Death toll from industrial disasters falls to 855 in 2019: labor ministry