SEOUL, Jan. 8 (Yonhap) -- A winter chill on Wednesday could not silence the voices that for nearly three decades have been calling for Japan's apology over wartime sex slavery, a mission that has gained urgency as the few remaining victims continue to age.

A few hundred people, including activists, students and one of the few surviving victims, Lee Yong-su, gathered in front of the former Japanese Embassy compound in Seoul, demanding Tokyo's sincere apology and legal compensation for the wartime atrocities.

It marked the 28th anniversary of the weekly Wednesday rally that first started in 1992 in line with then-Japanese Prime Minister Kiichi Miyazawa's visit to Seoul. Around 30 participants circled around the embassy building demanding Tokyo's acknowledgment of forced sexual slavery of Korean women during World War II.

A year later, the victims, once shy about publicly speaking out on their traumatic experience in a conservative social atmosphere, started to join the rally. 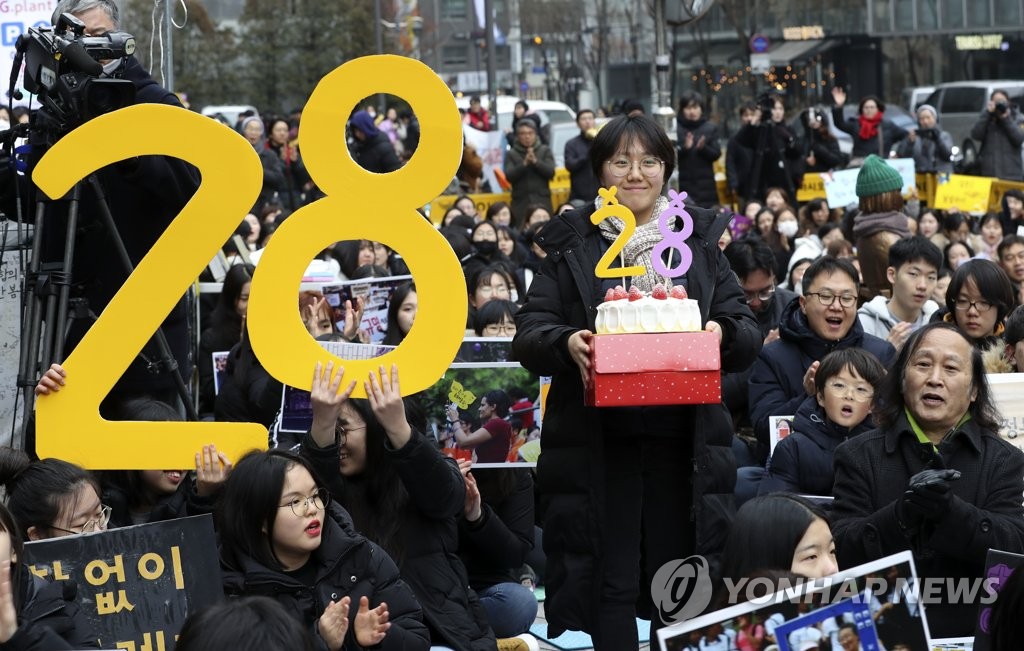 At Wednesday's event marking the 28th anniversary of the first rally, participants noted how such a small gathering has grown into a symbol of the peaceful civilian movement against Japan's wartime crimes.

"It's a long period in which a person can grow up to become an adult. Without exception, we have called for Japan's official apology and legal compensation as well as peace and human rights every week," said Han Kyung-hee, secretary-general of the Korean Council for Justice and Remembrance for the Issues of Military Sexual Slavery by Japan, a civic group advocating for the victims.

Participants have come together for the rally every week over the past 28 years, except when they canceled the gathering following the 1995 Kobe earthquake and when they instead held a remembrance ceremony in the aftermath of the massive earthquake and ensuing tsunami in March 2011.

"Japan's fundamental stance has not changed over the long period. However, we believe this is the road for victory. Once a lonely rally, so many people have now joined ... the world has come to realize that Japan should officially apologize and legally compensate for justice," Han said. 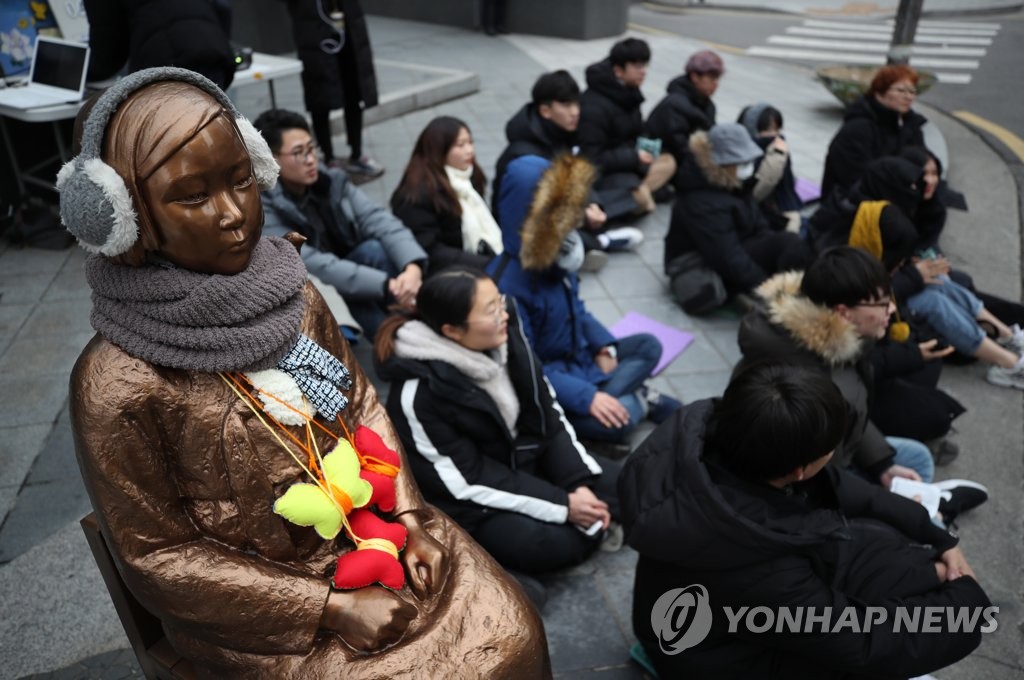 The brutality of Japan's sex slavery first surfaced in 1991 as the late Kim Hak-soon first publicly testified about her experience.

Since then, victims and activists have persistently demanded Japan's apology, which Tokyo has rejected, claiming the issue was settled in a 1965 treaty normalizing ties between the two countries.

In December 2015, the Park Geun-hye administration signed a deal with Tokyo to "finally and irreversibly" resolve the issue that has long remained a thorn in the two countries' relations.

The deal, including Japanese Prime Minister Shinzo Abe's indirect apology and a 1 billion-yen donation to a foundation dedicated to supporting surviving victims, however, came under fire here for not securing Japan's legal responsibility and leaving out the victims in reaching the deal.

The liberal Moon Jae-in administration later defied the deal as "seriously flawed" and dissolved the foundation, which Tokyo saw as a breach of the diplomatic agreement. 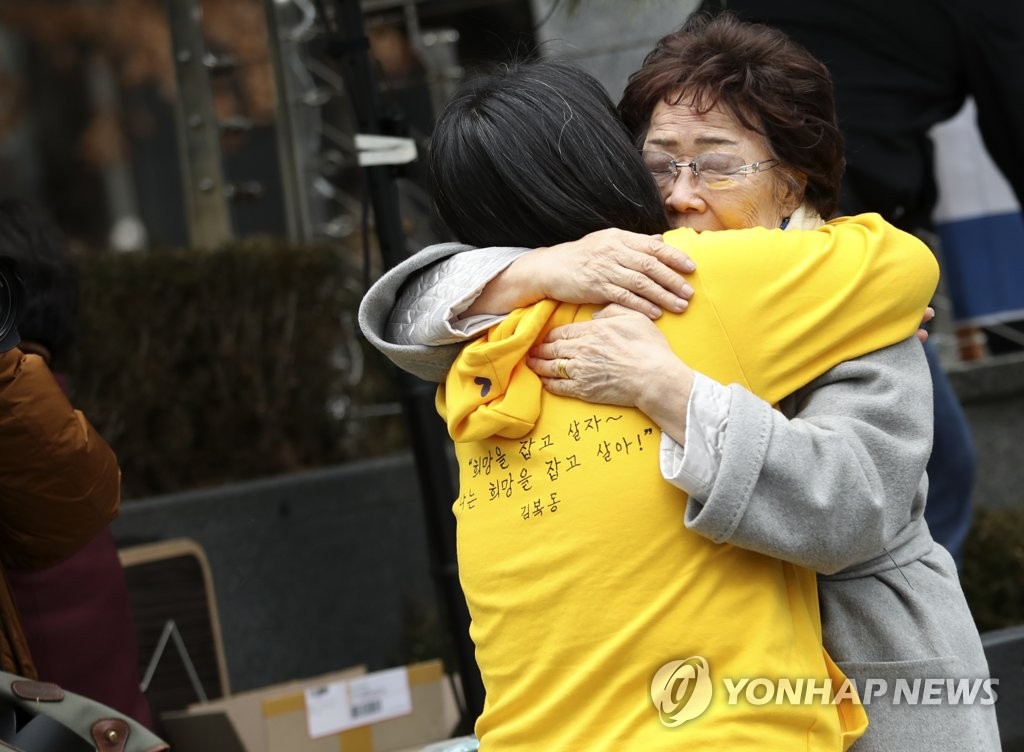 Lee Yong-su, 92, denounced the deal and vowed to continue to fight.

"Our government should return the 1 billion yen ... The world knows the deal was flawed. Truth will be revealed. We will win," said Lee, who was coerced into sexual slavery when she was 14.

Participants, meanwhile, voiced determination and hope for a dramatic development before too much time has passed.

"The victims, who have come to the rallies despite being criticized, laughed at or facing violent remarks, have become a scene of history. Now their places are empty, and Lee's comrades are not beside her anymore," said Yoon Mi-hyang, who leads the activist group, after calling out the names of victims who have passed away.

"We will fight so that we will not have to face the 29th anniversary (of the Wednesday rally)."

There are only 20 Korean survivors registered with the government after five victims died last year.