SEOUL, Jan. 8 (Yonhap) -- Shares in SK hynix Inc., the world's second-largest DRAM maker, traded at an all-time high on Wednesday on expectations that the chipmaking sector is set to improve this year after bottoming out in the fourth quarter of last year. 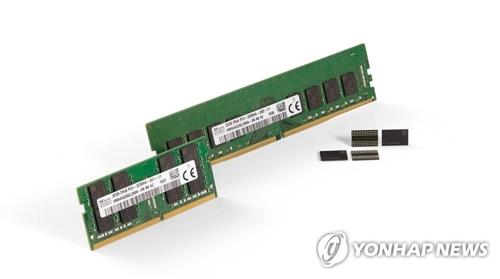 Investors bet that the global chipmakers will see improving earnings down the road.

Earlier in the day, Samsung Electronics, the world's largest memory chipmaker, estimated its fourth-quarter operating income at 7.1 trillion won, down 34.26 percent from a year earlier. But the figure was well above the median market estimate of 6.5 trillion won.

The market estimate-beating earnings guidance came on the back of a slight recovery in chip prices and better-than-expected market response for its smartphones.

In the July-September period, SK hynix's net profit plunged 89 percent to 495.5 billion won from a year ago.

Its third-quarter sales plunged 40 percent on-year to 6.8 trillion won, and operating profit plummeted 93 percent to 472.6 billion won, the lowest since the second quarter of 2016.