SEJONG, Jan. 8 (Yonhap) -- Educational authorities will make sure high school students can receive education about how to exercise their rights as democratic citizens after the country's minimum voting age was lowered to 18 last month, Education Minister Yoo Eun-hae has said.

"The voting age reduction is meaningful, and we will provide democratic citizen education even to students who have yet to receive suffrage," Yoo, who doubles as the deputy prime minister for social affairs, said in a press conference near the government complex in Sejong, central South Korea, on Tuesday.

Senior students at high schools have become newly eligible to vote since the National Assembly passed a public election law amendment on Dec. 27 that reduced the minimum voting age to 18 from 19.

The upcoming general elections on April 15 will be the first national race in which 18-year-olds will be able to vote.

Asked about how to deal with students gaining suffrage, Yoo said, "The ministry and education offices will hold talks with the National Election Commission to come up with details on the provision of education on the exercise of rights as democratic citizens."

"Students who participate in elections as voters should in no way violate the election law," the minister said, adding that the educational authorities, in consultation with the election watchdog, need to draw conclusions about whether election campaigns are permitted at schools and set the scope under which teachers are allowed to talk about elections. 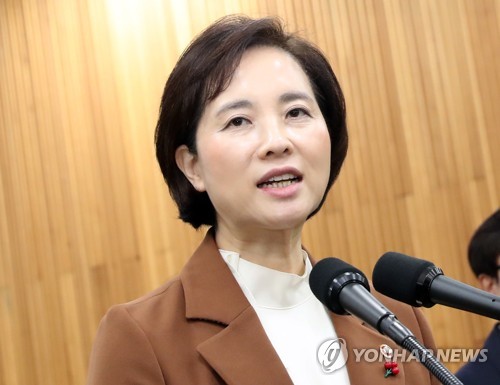