SEOUL, Jan. 8 (Yonhap) -- South Korea on Wednesday reported a suspected case of a mysterious pneumonia-like illness that has been spreading in China, the public health and safety agency said.

According to the Korea Centers for Disease Control and Prevention (KCDC), a 36-year-old Chinese woman who had visited the city of Wuhan in Hubei Province last month showed symptoms of the illness.

The patient has been isolated and is undergoing treatment after going into a local hospital in Dongtan, some 50 kilometers south of Seoul, on Tuesday. 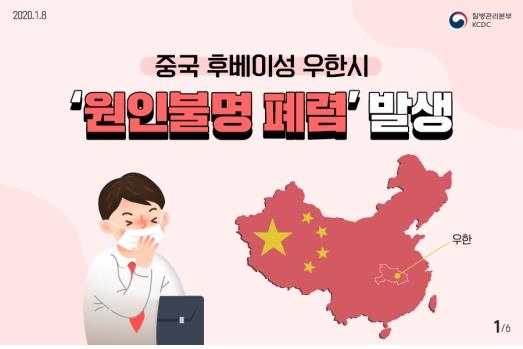 China has been grappling with people who have shown pneumonia-like symptoms such as mild-to-high fever, throat swelling and coughing in recent weeks. Some patients have complained of breathing difficulties, with doctors in China trying to determine what the disease is.

"The person is not suffering from any serious ill health," KCDC said. The center said that she is currently considered as a "patient under investigation" as an initial respiratory virus test turned out to be negative.

The health agency said that they are conducting more detailed tests to determine her state of health.

KCDC said it has tightened monitoring of people entering the country, as well as of those around her and medical personnel. It has advised travelers going to Wuhan to avoid contact with animals and birds and take extra care of personnel hygiene.

It has asked people to immediately report to doctors if they feel sick after their trips.

Beijing said earlier that the pneumonia-like illness does not seem to be transmitted between people.