(ATTN: UPDATES with details throughout; ADDS byline)
By Kim Kwang-tae

SEOUL, Jan. 8 (Yonhap) -- The Justice Ministry on Wednesday replaced senior prosecutors who have led investigations into a raft of scandals involving former Justice Minister Cho Kuk and some presidential officials.

The reshuffle came amid escalating tensions between the prosecution and the presidential office over its probes into Cho, a former presidential aide and one of the staunchest proponents of prosecution reform, and other Cheong Wa Dae officials. 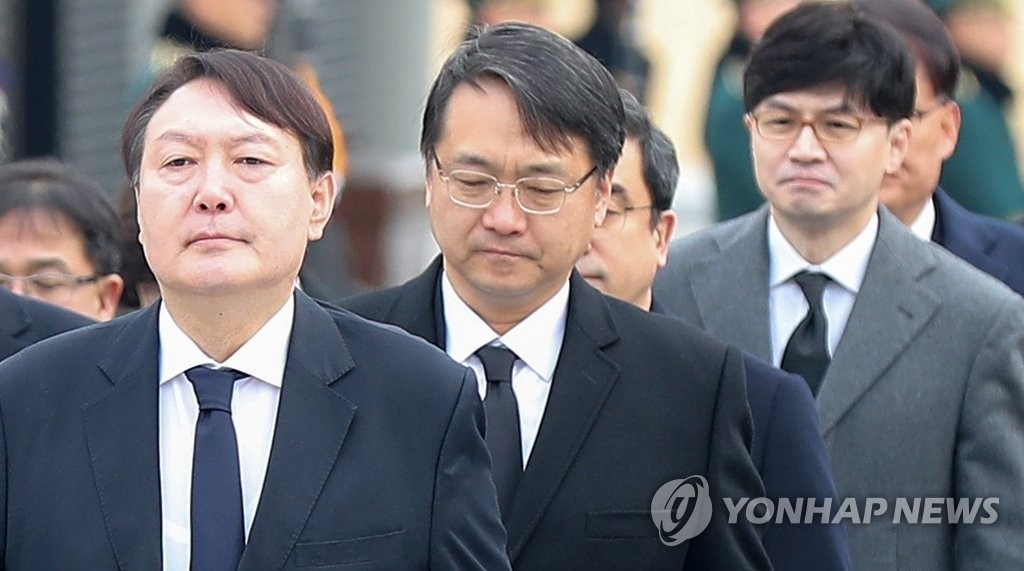 Involved in the shakeup was Han Dong-hoon, the head of the anti-corruption department, who has been in charge of probes into alleged irregularities by Cho's family and his suspected role in ending an inspection into bribery allegations involving a former Busan vice mayor.

Han was assigned to the No. 2 post in the prosecutors office in the southeastern port city of Busan.

Another key prosecutor replaced in the reshuffle is Park Chan-ho, who had been in charge of probes into allegations that the presidential office helped President Moon Jae-in's close friend win the 2018 mayoral election in Ulsan, an industrial city located about 400 kilometers southeast of Seoul.

Park was named as the head of the prosecution office in the southern resort island of Jeju.

Some incumbent and former presidential officials are suspected of conspiring to help Moon's close friend, Ulsan mayor Song Cheol-ho, win the mayoral race in the southeastern city in 2018 and of covering up an inquiry into a bribery case of former Busan Vice Mayor Yoo Jae-soo.

The probes have blown up into major cases involving multiple raids at government offices, including the presidential office and the finance ministry. Key figures, including former Justice Minister Cho, have also been questioned in relation to the allegations.

The presidential office has flatly denied the suspicions.

The reshuffle came five days after new Justice Minister Choo Mi-ae took office with a pledge to reform the prosecution in what she called "the demand of the times."

The post of justice minister had been vacant for more than two months since her predecessor, Cho Kuk, stepped down amid a prosecution probe into his family's alleged academic fraud and financial wrongdoing.

The ministry had wrangled with Supreme Prosecutors Office over a procedure under which the justice minister is required to listen to the prosecutor general's opinions on a reshuffle of prosecutors.

Prosecutor General Yoon was strongly trusted by Moon as he led intense probes into crimes committed by figures of the Park Geun-hye administration.

Still, Yoon's ties with the presidential office appeared to have soured as prosecutors have zeroed in on those close to Moon, especially Cho, who led the prosecution reform drive.

Jun Hee-kyung, a spokeswoman of the conservative Liberty Korea Party, condemned the reshuffle and claimed that the justice minister could face charges of abuse of power.

"The reshuffle is tantamount to an order by the presidential office that prosecutors stop investigations into those crimes," she said.

The Supreme Prosecutors Office said it had no plan to make an official statement on the reshuffle, though prosecutors said ongoing probes will continue unabated.

The ruling Democratic Party called on the prosecution to use the reshuffle as momentum to proceed with its self-reform.

Prosecution reform is one of Moon's top presidential campaign pledges.

On Tuesday, Moon instructed the Cabinet to quickly take measures to launch a non-prosecution agency tasked with investigating corruption by high-ranking government officials, following a related law that was passed late last year.