SEOUL, Jan. 9 (Yonhap) -- The government and the ruling Democratic Party (DP) on Thursday agreed to lift a regulation designating massive swathes of land near the border as protected zones, a move apparently aimed at furthering the government's peace initiative and boosting local economies.

The agreement covers areas spanning 77 million square meters, roughly 27 times larger than the financial district of Yeouido, which were categorized as protected areas for their close distance to military facilities.

"Of the areas where the regulation will be lifted, 79 percent are located in Gangwon Province, while 19 percent are in Gyeonggi Province," DP Rep. Cho Jung-sik said.

"The areas near the border where military facilities are concentrated will be prioritized, while (the agreement) also includes areas in Incheon, Chungju in North Chungcheong Province and Changwon in South Gyeongsang Province," Cho said.

Under the plan, the government will push for provincial governments in border areas to consult with the military. This applies to Ganghwa in Incheon, Uijeongbu and Dongducheon in Gyeonggi, and Yanggu, Goseong and Inje in Gangwon Province, according to Cho. 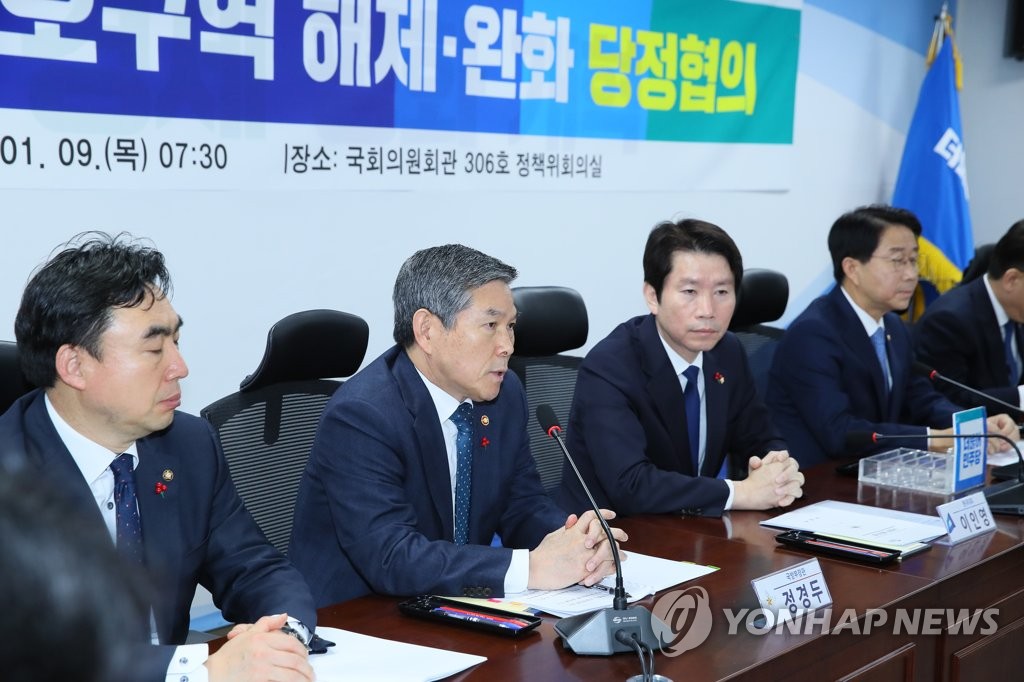 Separately, the government and the DP plan to consider measures on adjusting the civilian control line, an issue that regional governments claim negatively affects local economies.

"Military regulations for national security are inevitable and should be tolerated by everyone, but there also needs to be compensation to minimize damage and make up for sacrifice," said Lee.

"The implementation of the agreements made during the April 27, 2018, summit between the leaders of South and North (Korea) at Panmunjom will begin with lifting and easing military facility protection zones in the border area," Lee said, referring to the historic meeting between President Moon and Kim Jong-un.