Details of their conversation were not immediately available. Chung and O'Brien also held bilateral talks.

Speaking to reporters before leaving Seoul for Washington on Tuesday, Chung said he expected the meeting to focus on the recent situation on the Korean Peninsula and "ways to bring permanent peace to the peninsula through denuclearization negotiations."

Asked if he planned to discuss the possibility of deploying South Korean troops to the Strait of Hormuz amid rising tensions between the U.S. and Iran, he said, "We will talk about our views on various different issues, too."

Wednesday's meeting was also expected to serve as an opportunity to reaffirm the need for trilateral cooperation among the three countries following the near-termination of a military intelligence-sharing pact between Seoul and Tokyo. 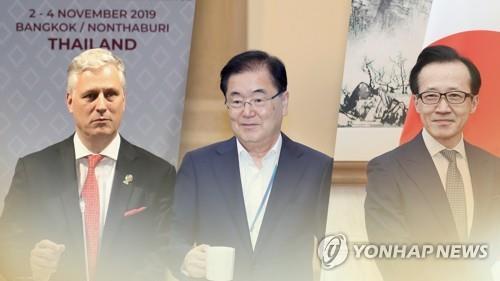