The ruling came after 252 alleged victims of forced labor in Japan and their families filed a joint lawsuit claiming they were forced to work for three Japanese companies, including Mitsubishi, in the early 1940s.

Of them, 40 plaintiffs, including Kim, argued that they were forcibly taken to Japan's Battleship Island to engage in forced labor. 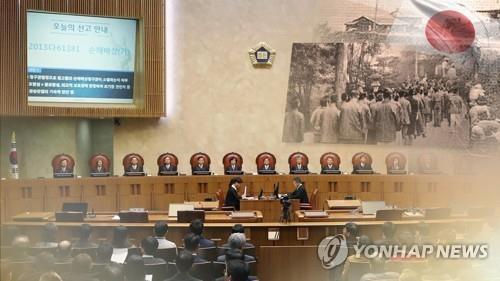 The plaintiffs initially began the litigation to ask for their unpaid wages but later changed it to demand consolation money for their forced labor, citing their unclear memory.

Among them, only Kim was awarded compensation by the Seoul court, as other plaintiffs failed to prove their forced labor by Japanese companies.

In similar rulings, South Korean courts have ordered Mitsubishi to pay around 90 million won to each of its forced labor victims.

In the case of Kim, however, his compensation was determined as he only demanded 10 million won, the court explained.

The Seoul court, meanwhile, rejected Mitsubishi's claim that South Korea has no jurisdiction over the case and the lawsuit be handled according to the Japanese law.

"There may be some legal criticism, but the purpose of the Supreme Court's previous rulings (against Japanese companies) should be respected," the Seoul court said.

But the Japanese companies have not accepted the South Korean court rulings, escalating bilateral diplomatic conflict between Seoul and Tokyo.