SEOUL, Jan. 9 (Yonhap) -- The top diplomats of South Korea and the United States will hold talks in San Francisco next week to discuss peace efforts with North Korea, tensions in the Middle East and the bilateral alliance, Seoul's foreign ministry said Thursday.

Foreign Minister Kang Kyung-wha and her U.S. counterpart Mike Pompeo were set to meet Tuesday, the ministry said, as Seoul and Washington face a set of tricky issues, including tense defense cost-sharing negotiations.

Japanese Foreign Minister Toshimitsu Motegi is also expected to travel to San Francisco for possible trilateral or bilateral talks with Kang and Pompeo. But his plans for the talks have not been finalized yet.

"The minister and secretary plan to assess the situation related to efforts for the denuclearization and the establishment of peace on the peninsula, ways to develop the South Korea-U.S. relationship in a comprehensive and mutually beneficial way and exchange views on regional and international issues, including the recent situation in the Middle East," Kim In-chul, ministry spokesman, told a regular press briefing.

"We believe that the upcoming talks will contribute to reaffirming the South Korea-U.S. alliance and strengthening cooperation at the regional and global levels." 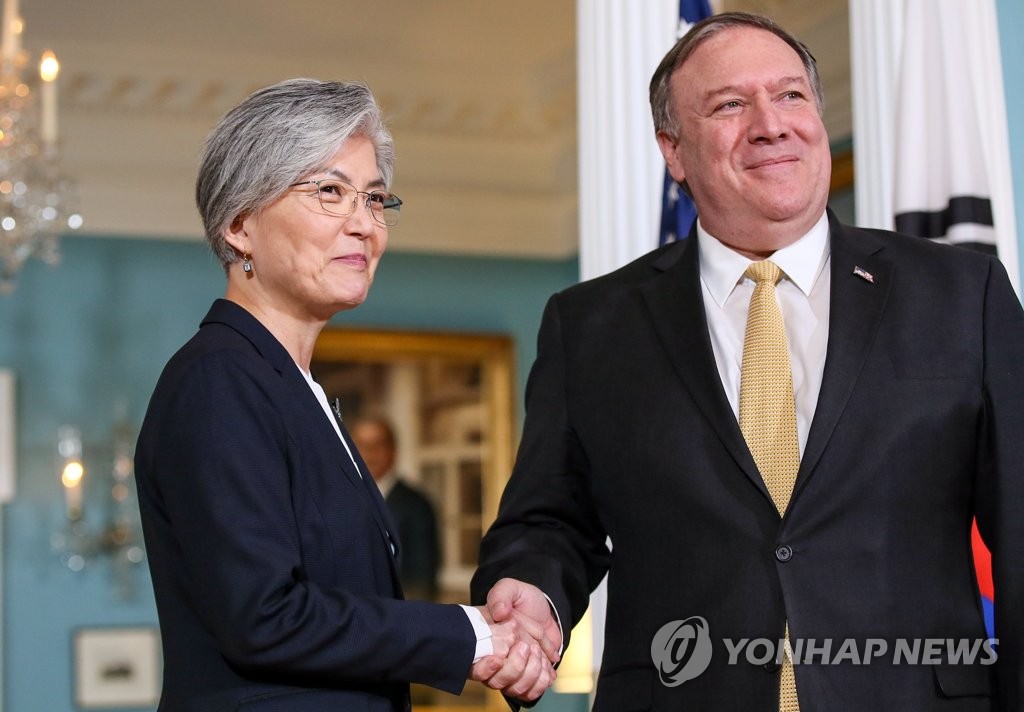 Pompeo has reportedly been seeking to arrange the talks with Kang and Motegi amid tensions with Pyongyang that has hinted at launching military provocations in protest over its stalled nuclear negotiations with the U.S.

In his New Year's Day message during a key ruling party meeting, North Korean leader Kim Jong-un warned of a "new strategic weapon" test and "shocking actual action" while accusing the U.S. of stalling for time in pursuit of its own political interests.

At the envisioned talks with Kang, Pompeo could also discuss ways for the American allies to contribute to the efforts to cope with military tensions in the Middle East that spiked after last week's killing of a top Iranian general in Iraq and Tehran's retaliatory attacks this week.

In particular, Washington has been expected to step up calls for its allies to join a U.S.-led maritime security campaign to safeguard the strategically vital Strait of Hormuz off Iran, which hosts crucial shipping lanes for more than 70 percent of South Korea's oil imports.

South Korea is still reviewing whether to join the maritime operations in light of its alliance partnership with the U.S. and trade relations with the Islamic republic. Observers say Seoul could send its anti-piracy Cheonghae unit operating off the Somali coast to the tense strait.

For Pompeo, another key issue could be strengthening American's trilateral security cooperation with its two Asian allies whose relations have remained chilled due to a protracted row over wartime history and Japan's export curbs.