SEOUL, Jan. 9 (Yonhap) -- Seoul cannot always be on the same page as Washington, Foreign Minister Kang Kyung-wha told lawmakers Thursday when asked about the government's stance on sending troops to the Strait of Hormuz.

"I think the stance of the United States and ours cannot always be the same in political analysis and when considering bilateral ties with countries in the Middle East," Kang told lawmakers in a meeting at the National Assembly.

"We have sustained economic ties with Iran for a long time and at the moment are continuously trying (to carry out exchanges) in humanitarian assistance and education."

The foreign minister said the government has not yet reached a conclusion on dispatching troops to help safeguard the Strait of Hormuz, a strategically vital area that serves as a route to the open ocean for more than one-sixth of global oil production and some 70 percent of South Korea's oil imports.

Kang's remarks come two days after the U.S. ambassador to South Korea voiced hopes for a possible dispatch of South Korean troops to the strait amid heightened tensions in the Middle East following the U.S. killing of a top Iranian general.

In an interview with South Korean broadcaster KBS, Amb. Harry Harris pinned hopes on the plan, noting that Seoul gets much of its energy from the Middle East.

Kang, meanwhile, said relocating part of the Cheonghae Unit, South Korea's anti-piracy unit currently stationed in the Gulf of Aden off Somalia, could be an option.

The Gulf of Aden is around 1,800 kilometers, or four days' sailing, from the Strait of Hormuz. Earlier this month, the National Assembly passed a motion to extend its mission, which started in 2009, through the end of next year.

The foreign minister said the government has been reviewing how to utilize its assets, adding that a legal review of the details of the dispatch would be necessary.

Seoul is expected to discuss issues related to the ongoing Middle East crisis next week at a bilateral ministerial meeting between Seoul and Washington in San Fransisco. 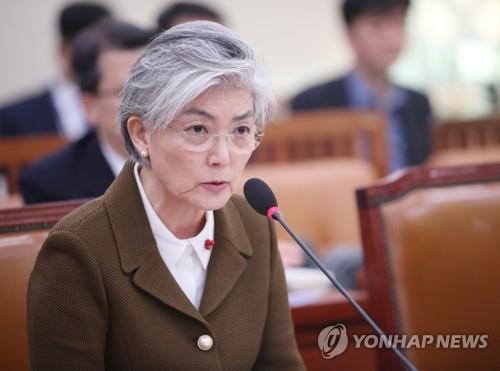