SEOUL, Jan. 9 (Yonhap) -- President Moon Jae-in plans to hold his press conference for 2020 next week, Cheong Wa Dae said Thursday, a couple of days after he detailed this year's policy priorities, including a renewed push for various inter-Korean programs.

Moon will meet with more than 200 local and foreign reporters at Cheong Wa Dae for the event to be televised starting at 10 a.m. on Tuesday. It's scheduled to last for 90 minutes, according to his spokesperson Ko Min-jung.

In a format similar to his press conference for the new year last year, Moon plans to select reporters himself to ask questions, she said.

Moon will explain the direction of managing state affairs this year and talk about his thoughts on related issues, including people's livelihoods, diplomacy and national security, as well as social and political matters, Ko added.

"(We) expect in-depth questions and answers, and are preparing to give sufficient replies to what the people are wondering," she said. 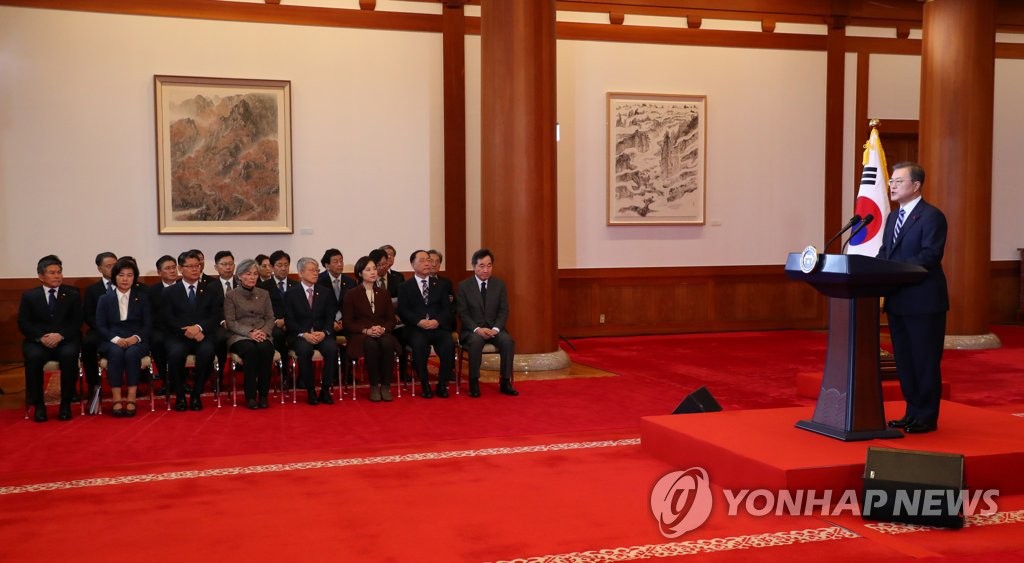 In his address for 2020, Moon proposed South and North Korea work together to restart joint ventures and other projects that would create the conditions for the North's leader Kim Jong-un to make a reciprocal visit to the South.

He called for the start of consultations on an unified team for the upcoming Tokyo Olympics and also vowed efforts to revive the two major inter-Korean economic projects: the Kaesong Industrial Complex and the Mount Kumgang tour program.

Moon is seeking an improvement in Seoul-Pyongyang ties in a bid to help facilitate denuclearization talks between Pyongyang and Washington.

Moon to hold press conference for new year next week

Moon to hold press conference for new year next week