SEOUL, Jan. 9 (Yonhap) -- South Korea's parliament on Thursday passed three bills intended to ease regulations on the use of personal information, despite objection from privacy advocates, as the country strives to catch up in the fiercely competitive data economy.

The National Assembly approved a total of 198 non-contentious proposals, long pending due to partisan wrangling, including the expansion of pension benefits for vulnerable people, legislation to promote a hydrogen economy and laws to better support youth, small merchants and farmers affected by African swine fever.

Speaker Moon Hee-sang also introduced a revision to the Criminal Procedure Law, one of two bills aimed at transferring key investigative authority from the prosecution to police. It is expected to be put to vote next Monday.

The main opposition Liberty Korea Party (LKP) had planned to block the prosecution reform bill with a filibuster but did not because it boycotted the plenary session amid dispute over a recent personnel reshuffle of senior prosecutors. 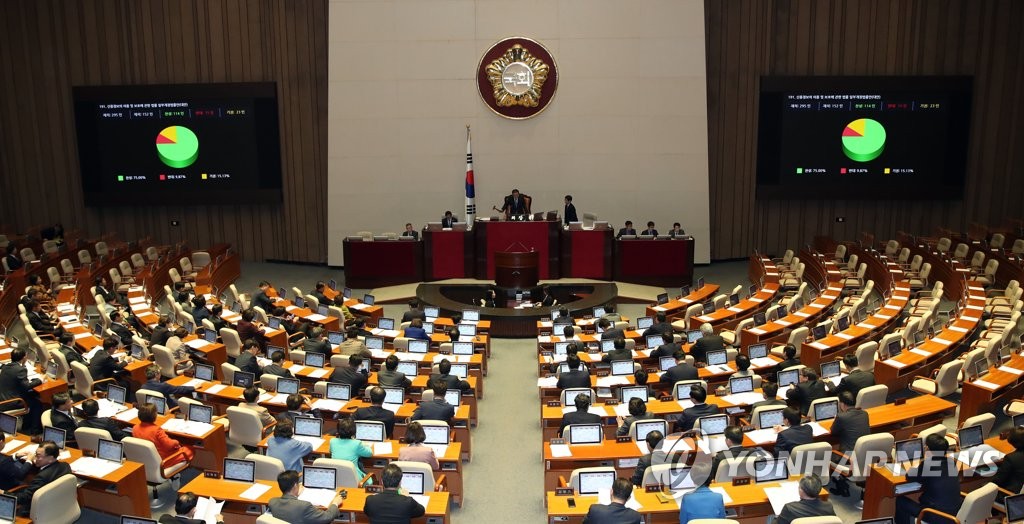 The ruling Democratic Party (DP) and four minor opposition parties voted to approve the slew of bills related to people's livelihoods, which the LKP previously agreed to endorse.

The three bills related to data are intended to enable the use of personal information offered under alias and processed technologically to conceal the provider's identity, without the user's consent, for compiling statistics and industrial research purposes.

The bills have been pending for more than one year amid disputes over privacy. The industry called for the legislation to help South Korean firms enhance their global competitiveness in response to the fourth industrial resolution by easing regulations on the use of personal information, as well as credit information.

But civic groups opposed the legislation due to possible breaches of privacy and called for stricter measures to protect private information.

In August 2018, President Moon Jae-in stated that "data economy" is a key to South Korea's innovative growth. He expressed his determination to improve the legal system so that South Korea can emerge as a global powerhouse in data use, beyond an internet-savvy nation.

Earlier in the day, the DP and the LKP agreed to hold the parliamentary session to handle non-contentious bills, placing on the back burner several contentious fast-tracked bills, including legislation on investigative authority.

But the LKP refused to attend the session in protest of a personnel reshuffle the justice ministry announced a day earlier that affected 32 prosecutors, including those who are seen as the prosecutor general's key lieutenants leading probes in high-profile scandals involving former Justice Minister Cho Kuk and other presidential officials.

The reshuffle drew strong protest from the LKP, which called it an attempt to hamper the investigations into officials closely associated with the presidential office.

The ruling party and the government have dismissed the criticism, saying that the organizational shakeup was carried out in a fair manner and according to due procedure.
(END)