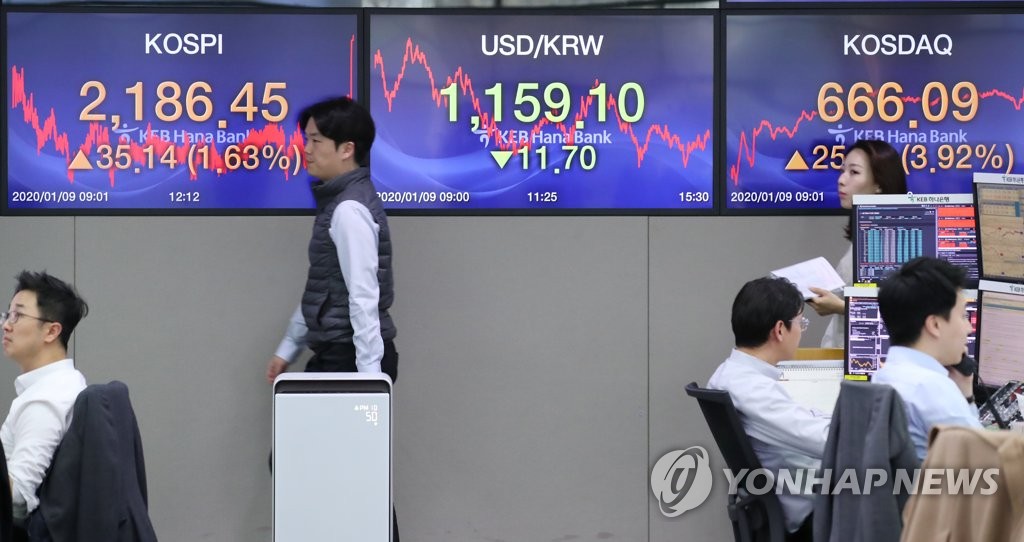 The rise marks a sharp turnaround from a slump for the South Korean stock market, as well as other major markets in Asia, that came after Iran's missile attacks on U.S. military bases in retaliation for the U.S. killing a top Iranian general late last week.

U.S. President Trump on Wednesday (U.S. time), however, said no U.S. personnel were killed or injured in the barrage of missile attacks against U.S. military bases in Iraq.

The U.S. leader said his country will respond with punishing economic sanctions instead of military attacks that he earlier warned of in case of Iranian retaliation.

"Iran appears to want to minimize the possibility of its military conflict with the United States," NH Securities analyst Noh Dong-kil noted, citing reports that Iran had notified Iraq of its intended missile attacks in advance.

"The possibility of the friction between the two countries leading to a full-fledged war has dwindled. President Trump too has said his country will switch its measures against Iran to economic sanctions," Noh said, adding, "The financial market cheered at the reduced possibility of war. The price of risky assets has returned to the pre-Iran crisis level."

Most large caps ended in positive terrain, with chipmakers continuing to build up gains on an outlook for a recovery in the global market.

Bond prices, which move inversely to yields, closed lower. The yield on three-year Treasurys added 5.3 basis points to 1.416 percent, while the return on the benchmark five-year government bond gained 5.6 basis points to 1.516 percent.