SEOUL, Jan. 9 (Yonhap) -- North Korea ranked No.1 in the world in terms of the proportion of military spending in gross domestic product between 2007-2017, though the total amount accounts for only one-tenth of South Korea's military expenditure, a U.S. State Department report showed.

According to the State Department's World Military Expenditures and Arms Transfers 2019 report, the North's military expenditure averaged about US$3.6 billion a year. That accounts for 13.4 to 23.3 percent of the country's average GDP of $17 billion during the period.

The percentage is expressed as a range due to the different methods of converting currencies to U.S. dollars, the report said.

Oman was a distant second on the list, spending around 12.1 percent of its GDP on the military, followed by Saudi Arabia with 9.3 percent, according to the report.

In absolute terms, however, the North's annual military spending during the period ranked only 47th at $3.6 billion, nearly one tenth of the average $34.8 billion South Korea spends on the military.

South Korea's military spending accounts for about 2.6 percent of its GDP.

It was also the biggest arms exporter in the world, selling an average $143 billion worth of weapons to foreign countries annually during the period, followed by Russia's $97 billion. 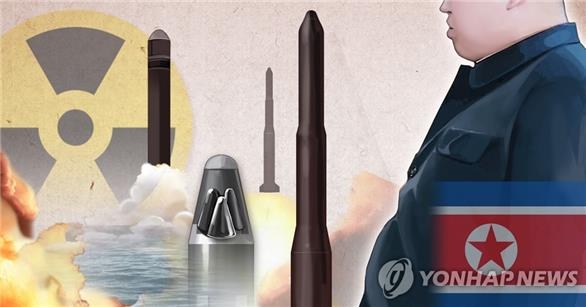