Trump met briefly with Chung Eui-yong, director of Cheong Wa Dae's national security office, and his Japanese counterpart, Shigeru Kitamura, and noted that the two countries are among the strongest U.S. allies in the Indo-Pacific, according to a White House readout sent late Wednesday.

The president also expressed appreciation for the "support and deep friendship" the U.S. shares with both countries, it said. 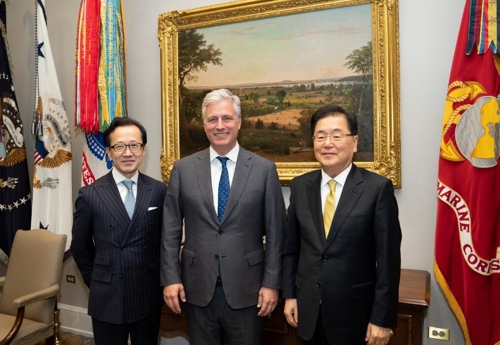 Chung arrived in the U.S. capital this week to hold three-way consultations with his American and Japanese counterparts on recent developments with North Korea.

"Discussions covered Iran, DPRK-related developments and the importance of trilateral security cooperation," it said, referring to North Korea by its official name, the Democratic People's Republic of Korea.

South Korea has been looking at ways to support U.S. security operations in the Middle East amid heightened tensions between Washington and Iran. Key among them is the possibility of deploying South Korean troops to the critical waterway in the Strait of Hormuz.

Washington has also emphasized the importance of trilateral security cooperation with Seoul and Tokyo in countering rising threats from North Korea and China.