SEOUL, Jan. 10 (Yonhap) -- South Korea's outstanding state and special bonds grew at the fastest rate in four years in 2019, largely due to government efforts to make up for a cut in tax revenues, data showed Friday.

The outstanding amount of bonds and debt issued by public institutions rose 5.3 percent from a year earlier to 1,020.4 trillion won (US$879.7 billion), according to the data from Koscom Corp., the system manager of the South Korean bourse operator, Korea Exchange. 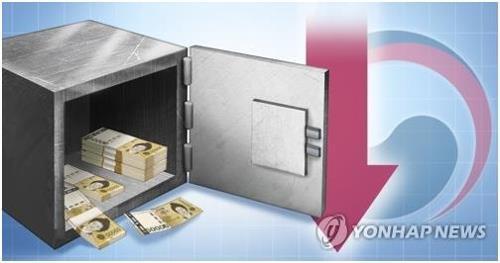 Public institutions net issued special bonds worth about 3.8 trillion won. Special bonds are indirectly guaranteed by the government and must be redeemed with tax revenues.

Koscom said the amount of state and special bonds expanded rapidly because the government issued more bonds to support the sagging economy in the face of dwindling tax revenues.

South Korea's state tax income reached 276.6 trillion won in the first 11 months of last year, down 3.3 trillion won from the same period a year earlier, according to data from the finance ministry.

According to the trade ministry, South Korean exports fell 10.3 percent on-year in 2019 after a record high performance the year before.