The conservative party said it submitted the proposal signed by 108 of its lawmakers to the National Assembly, with its floor leader calling the reshuffle an attempt to "massacre" the prosecution service.

Tensions between the prosecution and the presidential office have flared up over the prosecution's investigations into Cho Kuk, the former justice minister known as key architect of President Moon Jae-in's drive for prosecution reform, and other Cheong Wa Dae officials.

A motion to impeach a Cabinet member can be passed with the approval of a majority of lawmakers, after it is proposed by one third of legislators.

The LKP holds 108 parliamentary seats in the 295-member National Assembly.

The confrontation came to the fore after Choo said at a parliamentary session Thursday that Yoon "disobeyed" her order over the reshuffle.

Yoon refused to visit Choo to present his opinions on how to replace prosecutors. Prosecution law stipulates that the justice minister recommend the appointment of prosecutors to the president after listening to opinions of the top prosecutor.

The LKP also submitted a request to commence a parliamentary probe into allegations that Cheong Wa Dae and the justice ministry sought to interfere in the prosecution probe.

The launch of a parliamentary investigation requires a majority approval.

Cho, former senior presidential secretary of civil affairs, resigned from the post of justice minister in October after serving for a month. Scandals involving his family prompted his supporters and critics to stage separate massive street rallies over his qualification for weeks. 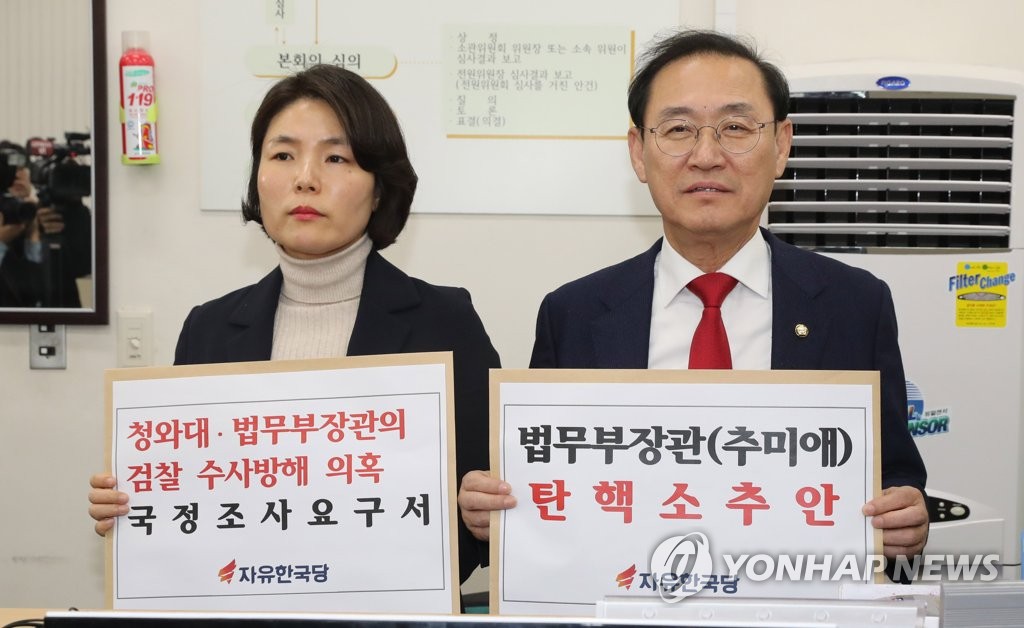