The instruction, apparently intended to restrict the prosecution's investigative authority, came two days after a controversial reshuffle in which the new minister reassigned senior prosecutors probing those close to President Moon Jae-in to provincial posts.

"Minister Choo specifically instructed the Supreme Prosecutors Office to establish an investigative organization only with urgent and inevitable causes after receiving approvals from the minister in advance," the Ministry of Justice said.

The Moon administration is pushing for sweeping reform of the prosecution, which has often come under criticism for allegedly abusing its massive investigative power while currying favor with those in power for its own interests.

In October, the ministry, under former Minister Cho Kuk, announced a set of reform measures that includes abolishing special investigative units of the prosecution that mostly focus on high-profile corruption crimes in all prosecution offices across the country, except for three major ones.

Tensions between the prosecution and the presidential office have flared up over the prosecution's investigations into a raft of scandals involving Cho and other officials. Cho is known as key architect of President Moon's drive for prosecution reform,

Meanwhile, Choo is reportedly reviewing whether it is possible to take disciplinary action against Prosecutor General Yoon Seok-youl for rejecting her order to present his opinion about the personnel changes of the Supreme Prosecutors Office.

On Wednesday, the ministry replaced 32 senior prosecutors in a reshuffle that relegated some senior prosecutors close to Yoon to provincial and less important posts. Prosecution law stipulates that the justice minister recommend the appointment of prosecutors to the president after listening to opinions of the top prosecutor.

The presidential office Cheong Wa Dae, the ruling party, and others have criticized Yoon for not submitting his opinion, saying that his action is considered insubordination to his superior.

Later on Friday, Choo called on the reassigned prosecutors to make efforts so that the ongoing prosecution reform drive can be a success.

"Prosecution reform is the people's wish and the needs of the times," Choo said during an official session of appointment. "Reducing the scope of the prosecution's direct investigation should also be carried out."

Immediately after the session, they attended a similar occasion with Yoon. He vowed unwavering investigations into the cases.

"There should be no disruption in investigation into ongoing important cases and trials should be carried out with continuity," Yoon said during his speech. 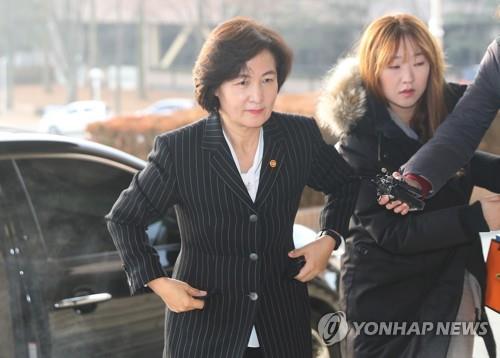