The leaders had an impromptu summit at the truce village of Panmunjom along the inter-Korean border on June 30 amid stalled nuclear talks.

"We consider it important to resolve problems through dialogue and negotiation and hope true peace will descend as soon as possible. But we cannot comply with the American style of dialogue, which unilaterally pushes for its demands. We do not want to beg for peace at the dialogue table or trade it for something," he was quoted as having said at the meeting.

"Our future is what we choose and we make, not what you guarantee and point to," he said. "The obvious thing is that if the United States insists on the current political calculations, the prospect of resolution will be murky and very dangerous," he said.

He added his county will no longer be attached to the lifting of international sanctions.

"Sanctions forced on us by you have caused our people's pain, which has now turned into anger. We are no longer interested in sanctions nor the lifting of sanctions," he said. 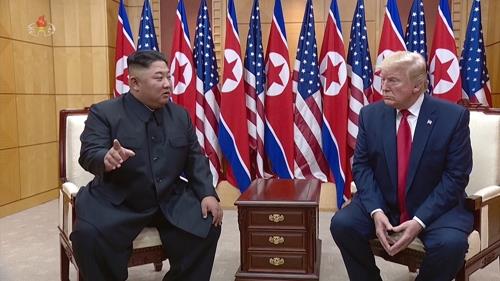 Keywords
#N. Korea-documentary film
Issue Keywords
Most Liked
Most Saved
Most Viewed All Categories
Most Viewed More
Most Viewed Photos