SEOUL, Jan. 11 (Yonhap) -- Son Heung-min's mesmerizing solo strike for Tottenham Hotspur against Burnley has been voted the best goal for December in the Premier League.

The English league announced Friday (local time) that Son earned his second career Goal of the Month award for his dazzling effort. His goal was chosen by a panel of experts, combined with a public vote. 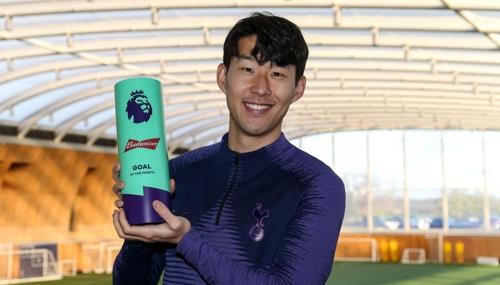 On Dec. 7 against Burnley at Tottenham Hotspur Stadium in London, Son secured the ball at the edge of his own penalty box to begin his dash. Son zipped past multiple defenders and dribbled 71.4 meters in 11 seconds -- by the Premier League's calculation -- to score what he described as "unbelievable."

The goal immediately had the football world and social media buzzing, and was hyped up as an early entry for the Premier League's goal of the season.

"It's a big honor for me, especially with this special goal," he told the Premier League's website. "As soon as I got the ball, I tried to find a pass, and I was a bit lucky. I dribbled into the space where no one was. I tried to finish it well because the action before was really quick. I was really focused on my finishing. It was an amazing feeling."

Son won his first Goal of the Month award for November 2018 for a strike against Chelsea. He's the fourth multiple winner of the prize, which was introduced during the 2016-2017 season.