DAEJEON, Jan. 12 (Yonhap) -- A state-funded science institute on Sunday announced plans to start research on volcanic activities at Mount Paekdu, the highest peak on the Korean Peninsula, located along the North Korea-China border.

A four-member team, set to be launched this month, will conduct the research in line with growing interest in the mountain's volcano activities and preemptive preparations for a possible joint study with North Korea, according to the Korea Institute of Geoscience and Mineral Resources.

The mountain was once considered a dormant volcano, but recent signs have indicated possibilities of an eruption, leading to numerous international research on the mountain. 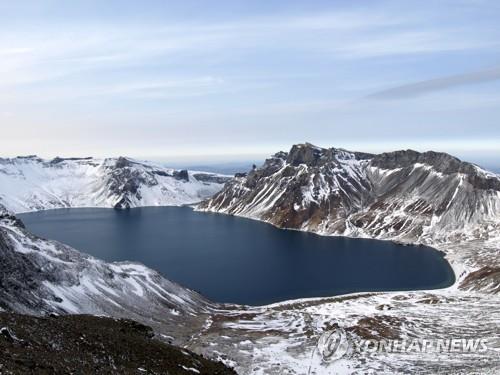 Historic records show the mountain erupted once in 946 and again in 947 during the Goryeo Dynasty (918-1392), covering the southern half of the peninsula with emissions measuring roughly 1 meter in height.

The institute said it plans to pump in 1.6 billion won (US$1.4 million) over the next four years to develop a volcanic plumbing system to better detect signs of eruption.

It also plans to research the exact period of past eruptions through rock samples extracted from Ulleung Island in the East Sea and Mount Halla in the country's southern resort island of Jeju.

Mount Paekdu is revered in both South and North Korea.

South Korea considers the 2,744-meter peak as one of the peninsula's most sacred places as it's known as the birthplace of Dangun, the legendary founder of Gojoseon, the first Korean kingdom, founded more than 4,000 years ago.

North Korea regards the peak as sacred because it's where Kim Il-sung, the country's late founder and grandfather of the current leader, set up a secret military base for anti-Japanese, independence struggles during the 1910-45 colonial rule.

The peak is also known to be the birthplace of the late North Korean leader Kim Jong-il and led to the coining of the term "Paekdu bloodline," regarding the Kim family. But some historians say the late leader was actually born in Russia.

Most recently, "Ashfall," a blockbuster disaster film featuring some of South Korea's top film stars, was released, sparking fresh interest in the mountain.