SEOUL, Jan. 12 (Yonhap) -- A Seoul court is set to begin a review this week of its ruling over disgraced former President Park Geun-hye, who was impeached in 2017 following a bribery scandal that rocked the country.

Park was impeached midterm in March 2017 on allegations she and her close friend abused their power and received billions of won in bribery from top conglomerates, including Samsung and Lotte.

The Seoul High Court is scheduled to begin the retrial Wednesday, roughly five months after the country's top court ordered the appeals court to review the case, citing procedural issues.

The appellate court had initially handed down a 25-year prison term and a 20 billion-won (US$17 million) penalty to the former president.

The court, meanwhile, will also combine another case in which Park was charged with illegally receiving funds from the state spy agency.

The Supreme Court had also ordered a review of the case, in which Park was sentenced to five years in prison in addition to a 2.7 billion-won fine, on views that additional charges should be acknowledged.

The former president is not expected to appear for the retrial. She has boycotted all court schedules since October 2017.

The bribery case was one of the biggest political scandals in the country's modern history. Tens of millions of people poured into the streets between October and December 2016 to hold candlelight vigils demanding her exit.

Park was impeached by parliament in December 2016, a decision that was upheld by the Constitutional Court in March 2017, permanently removing her from office a year before the scheduled end of her five-year term.

The succeeding Moon Jae-in administration, often associated with the candlelight movement, pledged to reform the country's chaebol, or family-controlled conglomerates, that are often criticized for their excessive influence on politics. 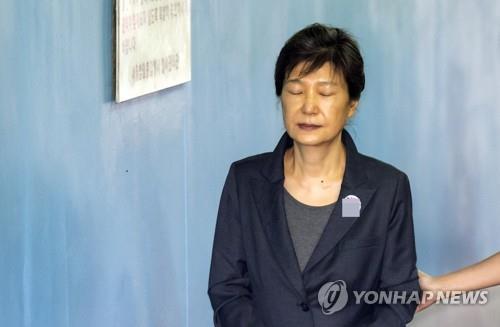