The textbooks authored and published under the disgraced former president had been criticized for their right-leaning values and alleged attempts to distort facts related to her late father Park Chung-hee's 18-year dictatorship.

Two years after her appointment in 2013, Park ordered a rewrite of the history books, calling on the need to remove "left-leaning" details and establish "correct" history education.

The liberal Moon Jae-in government scrapped the policy in 2017 and began a probe into the controversial textbooks, which found that officials were mired in a number of misconducts, including the fabrication of a public poll result on the history textbooks.

The new textbooks, the first revised version to be published following the row, more clearly indicate historic facts, such as specifying the Korean War as beginning with the North's invasion of the South.

Most textbooks increased the amount and depth of details of Japan's 1910-45 colonial rule of Korea and wartime atrocities.

Some textbooks carry special pages featuring the forced wartime labor of Koreans and the territorial dispute over Dokdo, the country's easternmost islets, which has been a thorn in Seoul-Tokyo relations.

They also introduced modern-day activities related to the colonial past, such as a 2018 Supreme Court ruling that ordered Tokyo's compensation of forced labor or the weekly Wednesday rally that are held in protest of wartime sexual slavery.

The textbooks also highlight the feats of female independence fighters, which were considered to have been insufficiently covered in history textbooks. 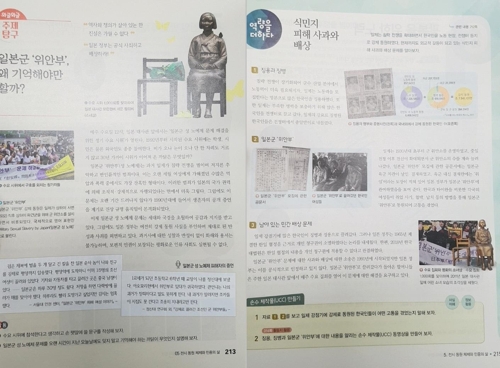