The music video of "Idol," the lead track of BTS' repackaged album "Love Yourself: Answer" released in 2018, achieved the feat early Sunday morning, according to the band's management agency, Big Hit Entertainment.

The music video, which won the Music Video of 2018 at the E! People's Choice Awards, grabs the eyes with its impressive color palette and reimagined images capturing traditional Korean culture.

With the feat, BTS now has six music videos that have reached 600 million views, with the others being "MIC Drop," "DNA," "Fire," "Fake Love" and "Boy With Luv," a milestone that no other K-pop artist has achieved.

BTS is currently preparing to release a new album titled "Map of the Soul: 7" on Feb. 21. 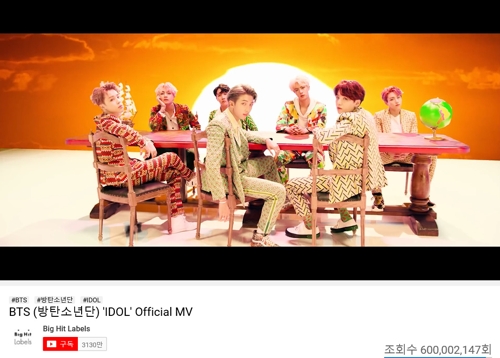