SONGKHLA, Thailand, Jan. 13 (Yonhap) -- Very seldom do you see a football team change more than half of its starting lineup from one match to the next, especially after a victory.

And South Korea head coach Kim Hak-bum provided that rare moment at the Asian Football Confederation (AFC) U-23 Championship in Thailand on Sunday, when he inserted seven new faces into his starting XI against Iran, following a 1-0 win over China three days earlier. 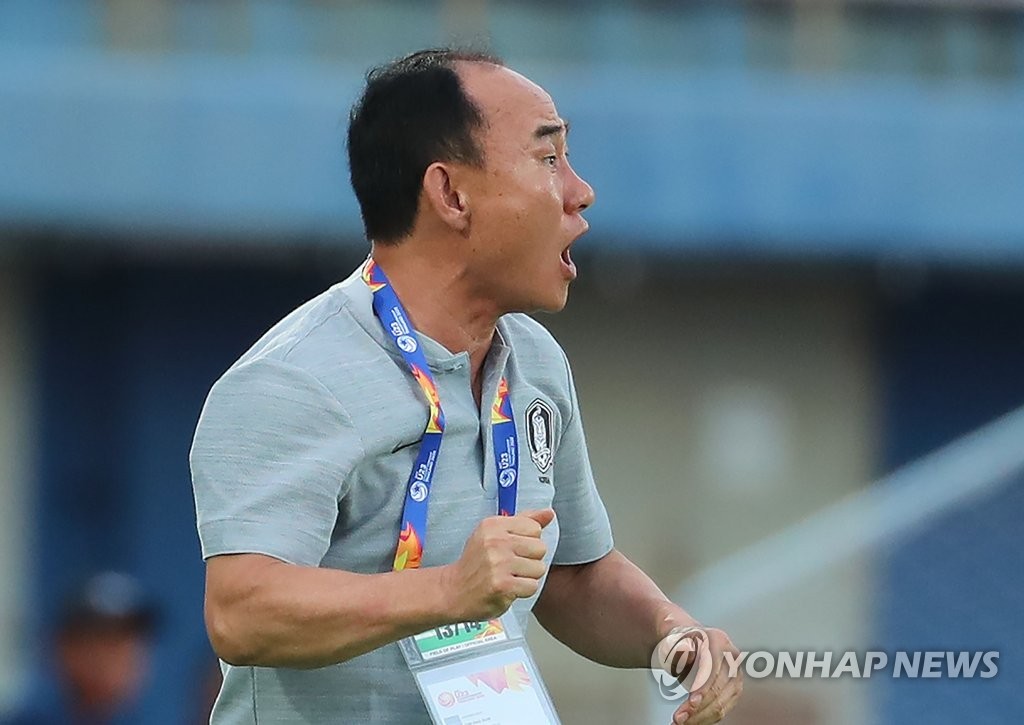 The decision couldn't have worked out better, as two of the new starters, midfielder Lee Dong-jun and striker Cho Gue-sung, scored a goal apiece to lift South Korea to a 2-1 victory.

By winning the first two of their three group matches, South Korea locked down a spot in the quarterfinals of this tournament, which doubles as the continental qualifying event for the 2020 Tokyo Olympics. The top three nations will compete in the Japanese capital this summer, and South Korea are chasing their ninth consecutive Olympic appearance in men's football.

After South Korea barely beat the underdogs China, with Lee, as a second-half sub, scoring the winner in the dying seconds, Kim declared there would be some changes. But few outside the team could have predicted such a massive overhaul to the lineup.

Goalkeeper Song Bum-keun stayed in net for the second straight match, and seven of 10 players in front of Song got their first starts against Iran.

Of those seven, two were second-half substitutes against China, and five, including Cho, didn't even play in the first match.

Kim said he felt comfortable making these changes because of the depth of his team and his trust in every player.

"No matter who's on the pitch, these players will get the job done," Kim said. "I was able to make these changes because I had faith in my players." 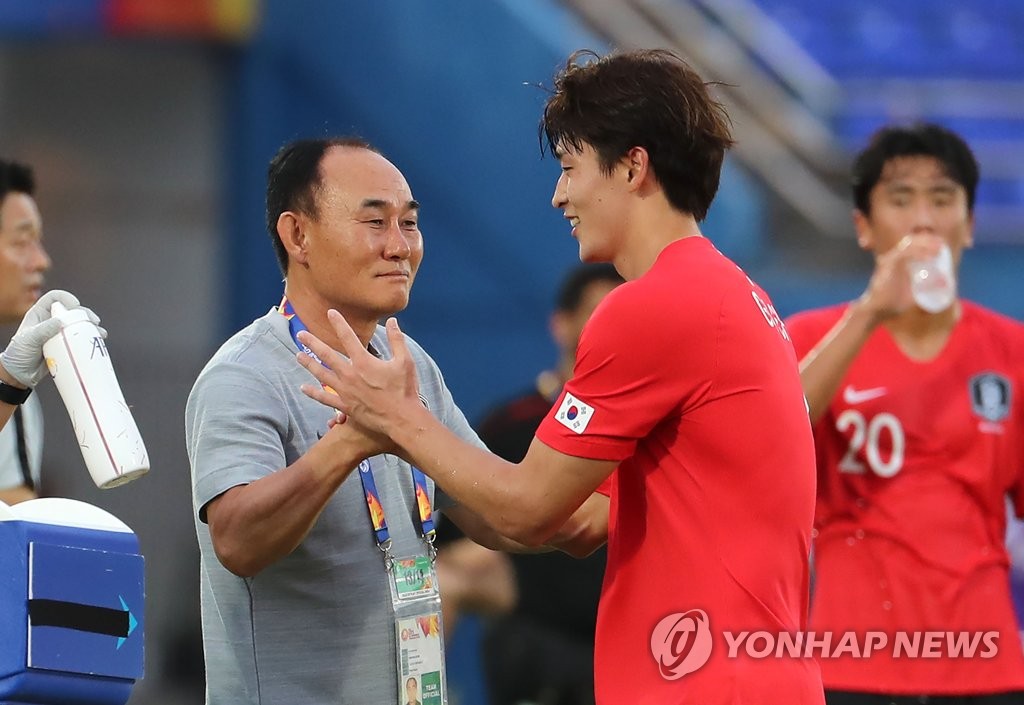 These lineup changes were so drastic that they even caught Iranian coach Hamid Estili off guard.

"We have a good team of advance scouts and analysts, but we couldn't predict every one of these changes," Estili said. "We only figured there could be a couple of new faces who weren't exhausted (from playing the first match)."

In two matches, 19 of 23 South Korean players have seen action. Excluding two backup goalkeepers who won't get into any match barring injury to Song, that means all but two field players, defenders Kim Tae-hyeon and Yoon Jong-gyu, have played so far.

One potentially positive side effect from Kim's unusual approach is that it keeps everyone mentally engaged and continues to foster internal competition during the tournament. Coaches typically ride about a baker's dozen big horses in a tournament like this, and that tends to leave a good chunk of the team without a hope of getting into the starting lineup.

From the first match to the next, Coach Kim changed half of his back-four defensive line, replaced four of his five midfielders, and switched his starting striker.

This sends a message that even if you start one match, it doesn't guarantee you another gig the next match. And on the flip side, it gives those on the bench hope that they could start in any match if they stay ready.

And that was exactly the mindset for Cho, who watched the China match from the bench as starting forward Oh Se-hun had trouble finishing his chances.

"Even though I didn't play in the opening match, I wasn't sad or disappointed," Cho said. "I just thought I had to prepare myself for another opportunity." 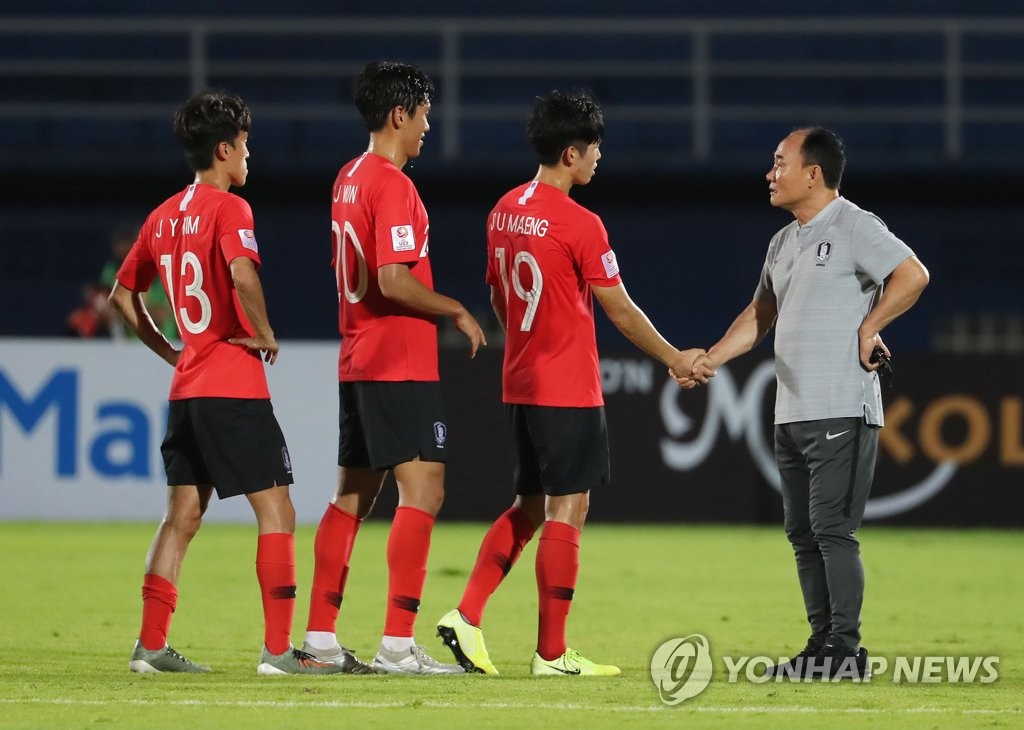 Sure enough, Cho got the starting nod and he delivered a thunderous goal in the 35th minute that provided the margin of victory.

Oh, meanwhile, was summoned off the bench for a couple of meaningless minutes during added time.

Granted, Kim might just have doled out a less than optimal lineup against China, believing he could beat them with his "B" squad and conserve his best players for later matches in the process. Things didn't quite go that way, as South Korea barely avoided getting held to a scoreless draw, which would have felt like a loss.

Did Kim plan all along to field such vastly different lineups for these two matches? Or did he make that decision on the spur of the moment after the China match?

Only Kim himself would know the answers, and he isn't about to tell anyone.

South Korea will close out the group stage against Uzbekistan on Wednesday. South Korea only need a draw to grab the top seed, and Kim may yet make more switches to his lineup.

Asked if more changes are on the horizon, Kim smiled and said, "I can't tell you at this moment."

"We'll approach every match like it's our last," the coach added. "I trust my players. We'll go out there and play just the way we've prepared to play."