SEOUL, Jan. 13 (Yonhap) -- President Moon Jae-in will be busy throughout Monday preparing for his New Year's press conference the next day, according to his aides.

Moon has no official schedule for the day, planning to anticipate questions and rehearse his answers during the event scheduled to start at 10 a.m. Tuesday and last for 90 minutes. It's to take place at the Yeongbingwan state reception house in the presidential compound Cheong Wa Dae, with around 200 local and foreign reporters in attendance.

In a format similar to his Jan. 10 news conference last year, Moon is to select reporters himself to ask questions without a prepared list. Cheong Wa Dae spokesperson Ko Min-jung will assist him in running it.

"(We) expect in-depth questions and answers and are preparing to give sufficient replies to what the people are wondering," Ko said.

The president is likely to face a barrage of queries especially on North Korea, a brewing controversy over his state prosecution reform drive and soaring housing prices in Seoul. 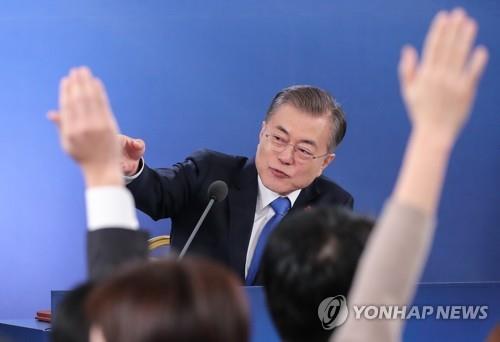 Moon's aim is apparently to help revitalize Pyongyang-Washington denuclearization talks through an improvement in Seoul-Pyongyang ties. Last year, the Moon administration played a rather low-key role in hopes of substantive results from dialogue between the U.S. and North Korea.

His remarks led to public speculation that there might have been some prior consultations between the two Koreas.

A Cheong Wa Dae official, however, said there's "no concrete move yet" associated with Moon's overtures.

"His focus was to demonstrate South Korea's determination to play a role in moving forward the Korea peace process and present the direction of its North Korea policy," the official said, requesting anonymity.

Pyongyang has not formally responded to Moon's latest offer, although one of its senior officials issued a statement over the weekend dismissing Seoul's role as "mediator" or "facilitator."

The North's Committee for the Peaceful Reunification of the Country, which handles inter-Korean affairs, bluntly criticized Moon's offer in a statement issued the following day and even said it would make a "boiled head of a cow laugh."

In his own statement on Saturday, Kim Kye-gwan, a North Korean foreign ministry adviser, ridiculed Seoul's pursuit of a mediating role between Pyongyang and Washington but stopped short of mentioning Moon's New Year's speech.

The president is expected to provide some more details on his view on current situations and background on his latest proposal during the news conference.

Also drawing keen attention are his comments on the conflict over prosecution reform measures.

Moon's office has been at odds with the prosecution, which is widening its probe into suspicions that some of his aides might have meddled in the 2018 mayoral election in the southern city of Ulsan. Song Cheol-ho, a longtime friend of Moon, ran in the election and won it. Cheong Wa Dae is also accused of abusing its power to drop a 2017 internal inspection of Yoo Jae-soo, then-director general of the Financial Services Commission, over allegations of graft. Yoo, known to have personal ties to Moon, became a vice mayor of Busan, a southern port city, in 2018 and was arrested later on bribery charges.

Critics of the Moon administration claim that Cheong Wa Dae is trying to cover up its wrongdoings on the pretext of prosecution reform.

The Ministry of Justice has already replaced several senior prosecutors and confidants to Prosecutor General Yoon Seok-youl in charge of relevant investigations.

The ministry said it was part of a regular shake-up of top prosecution officials, but Moon's political opponents view it as aimed at weakening Yoon's leadership and obstructing the ongoing probes against Cheong Wa Dae.

Many people will pay heed to Moon's message as well on skyrocketing home prices in Seoul and nearby Gyeonggi Province.

He has declared a war against property speculation amid lingering skepticism about the effects of the government's tough steps to stabilize the market.