SEOUL, Jan. 13 (Yonhap) -- Foreign Minister Kang Kyung-wha left for San Francisco on Monday for talks with her U.S. counterpart on key pending issues, including South Korea's possible contribution to protecting the Strait of Hormuz and peace efforts with North Korea.

Her planned meeting with U.S. Secretary of State Mike Pompeo, set for Tuesday (U.S. time), comes as Washington has stepped up calls for its allies to join a U.S.-led maritime security coalition to safeguard the strategically vital waters off Iran.

The issue is expected to top the agenda, with tensions in the Middle East having spiked after Tehran launched a retaliatory missile attack on U.S. bases in Iraq last week after the U.S. killing of a top Iranian general.

"We've been reviewing the matter. I will listen to the thoughts of the U.S. side and what they say about what we've been reviewing," Kang told reporters at Incheon International Airport. "I believe the content of our discussions this time will be considered when the government makes its decision."

Seoul has been looking into ways to participate but has largely been reserved about it, considering its trade relations with Iran, one of the countries bordering the key waterway used for more than 70 percent of South Korea's oil imports. 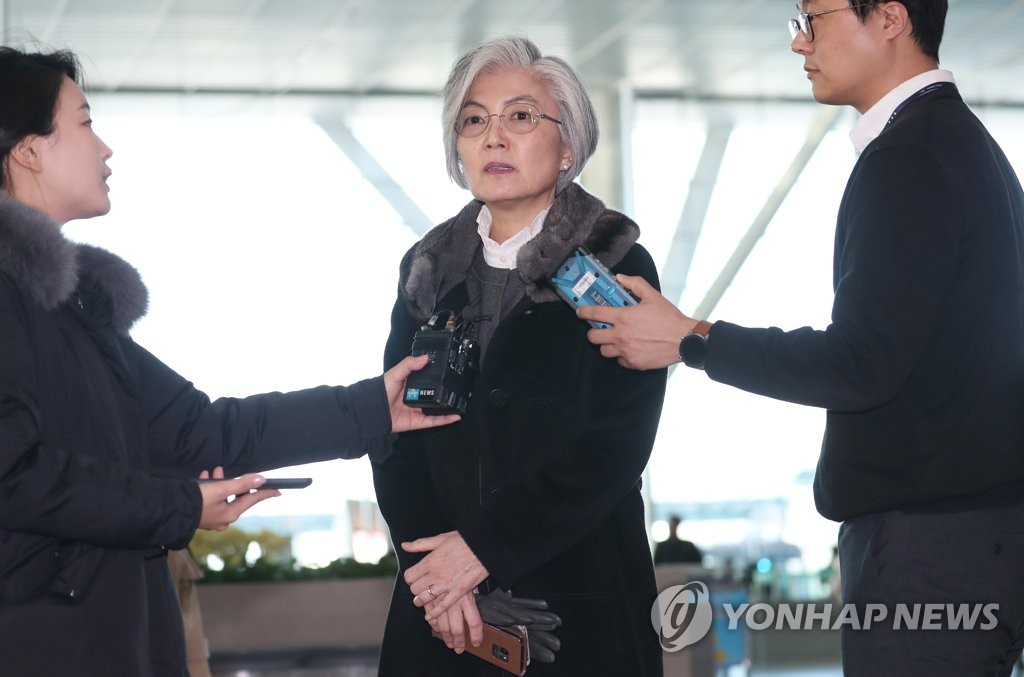 Observers say Seoul could send its anti-piracy Cheonghae unit operating off the Somali coast to the strait, instead of sending new troops.

On Friday, the foreign ministry in Seoul called in Iran's top envoy to lodge a protest over his remarks in a media interview warning of a negative impact on Seoul-Tehran ties if South Korea dispatches troops there.

In the upcoming talks, the two top diplomats are also expected to discuss the denuclearization talks with North Korea that have remained stalled since a 2018 summit in Hanoi of U.S. President Donald Trump and the North's leader Kim Jong-un ended without a deal.

"It's important to deter additional provocations by North Korea at this time. We'll discuss efforts to resume the dialogue process and I believe soon there will be envoy-level talks," Kang said.

Lee Do-hoon, South Korea's top nuclear negotiator, is said to be planning a visit to Washington as early as later this week to meet with U.S. Deputy Secretary of State Stephen Biegun, who also serves as the top nuclear envoy.

Pyongyang made it clear in a commentary Saturday by its former nuclear envoy that the dialogue with Washington can only resume when the U.S. fully accepts its demands for concessions -- sanctions relief and security assurances.

The North then ridiculed South Korea's presidential office for trying to be a mediator between Washington and Pyongyang with the delivery of Trump's birthday message to Kim, warning it not to "meddle in" the relationship of the two leaders.