SEOUL, Jan. 13 (Yonhap) -- The United States has reached out to North Korea "through various channels" in order to resume stalled denuclearization talks, U.S. National Security Adviser Robert O'Brien has been quoted as saying.

O'Brien also indicated in an interview with online news outlet Axios published Sunday that he was cautiously optimistic about the way forward, as the North has not yet carried out its threat to undertake provocations as a "Christmas gift" to the U.S.

"We've reached out to the North Koreans and let them know that we would like to continue the negotiations in Stockholm that were last undertaken in early October," O'Brien was quoted as saying in the interview, held Friday.

"We've been letting them know, through various channels, that we would like to get those (negotiations) back on track and to implement Chairman Kim's commitment to denuclearization of the Korean Peninsula," he said, referring to the North's leader by his title as chairman of the State Affairs Commission.

The official did not elaborate on the "various channels."

The interview was published a day after former North Korean nuclear negotiator Kim Kye-gwan said in a statement that U.S. President Donald Trump sent the North's leader a happy birthday letter, but Pyongyang will not return to the negotiating table just because of the personal ties between the two leaders.

Kim also said nuclear talks can resume only when the U.S. fully accepts the North's demands.

O'Brien said it was a positive sign that the North has not sent any "Christmas gift" yet.

"The president suggested he send him a vase. We didn't get a vase or any other sort of Christmas gift. That appears to be positive," he said in the interview, mentioning an earlier joke made by Trump in response to North Korea's threat to send an unwanted Christmas gift.

O'Brien did not rule out the possibility of a nuclear test, however, saying, "(That) doesn't mean we won't see some sort of test in the future." 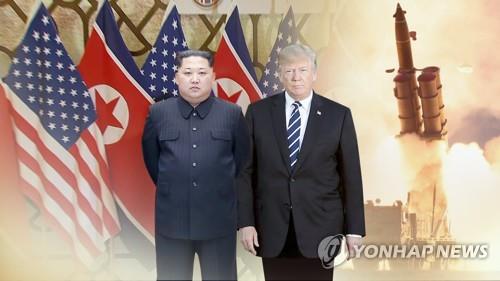