According to the National Police Agency (NPA), a total of 73,221 drivers aged 65 or older voluntarily returned their licenses, marking a 6.1-fold surge over 11,913 such licenses surrendered in the previous year.

People aged 75 and above accounted for 71.5 percent, or 52,377, of the elderly drivers who gave up their licenses last year, the NPA noted. 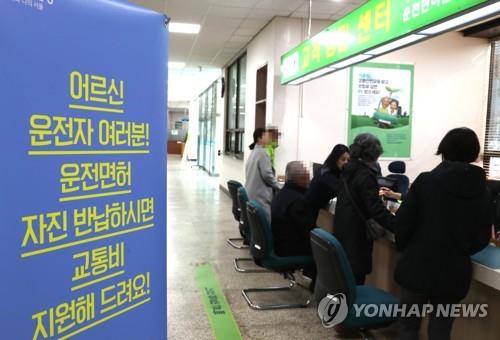 Behind the steep increase in the number of senior drivers giving up their licenses was the introduction of a support program for senior citizens surrendering their driver's licenses by local governments.

Forty municipal governments, including Seoul, Daegu and Incheon, have implemented an incentive program that provides 100,000 won (around US$83) a month in a transportation allowance to senior drivers who voluntarily return their licenses.

The NPA plans to provide 1.39 billion won out of its annual budget to local governments this year to share their payment of transportation allowances for elderly drivers returning their licenses.

The government has steadily encouraged elderly people to stop driving, saying their eyesight and cognitive ability may deteriorate due to old age.

Starting last year, drivers older than 75 are obliged to renew their driver's licenses and take an aptitude test every three years, instead of every five years.

According to police data, elderly people above 65 accounted for 14.3 percent of South Korea's population as of the end of 2018, but they accounted for 44.5 percent of road accident fatalities.